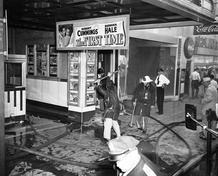 Since closing in the mid-1950’s it has been demolished and there is a parking garage where the theatre once stood. Any further information on the Roxy Theatre would be appreciated.

Actually the theater burned. The double feature playing at the time was “Pride of St. Louis” and “The First Time.” For many years the marquee remained. The Pied Piper music store used the front portion. The former auditorium had the seats removed and the rear entrance served as a parking facility. CB Hukle owned the theater.

Photo of the fire courtesy of The Herald Dispatch and provided by permission.

1927 view of The Strand theater and neighboring buildings in the 1000 block of 4th Avenue. It had only been open for about a year at the time of this photo and during the early 1930s the theater became the Roxy theater. This part of 4th Avenue was still mostly residential a dozen years before the photo was taken. Around the turn of the century, businesses started replacing the old houses along the street. Starting at 10th Street (and out of view in this photo) The Day & Night Bank was built in 1903, Elks Club 1909, and Orpheum Theater in the early 1910s. The Roxy experienced a fire August 25, 1952, but the building was repaired and remained in use for over 10 more years.