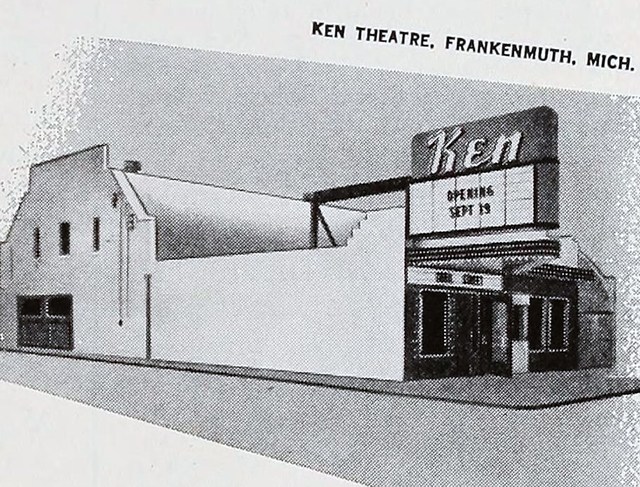 The Ken Theatre was one of the first movie theatres to utilize Quonset prefabricated materials in its construction. Built in 1947, from ground breaking to opening day was 12 weeks. Cost was $27,000.00. The Ken Theatre opened on September 19, 1947.

The long narrow auditorium had a vaulted ceiling. A nicely draped semi-circular proscenium framed a tiny stage. Otherwise the interior was quite plain.

The low-ceilinged dog-legged lobby led into the auditorium. Exterior decoration was limited to the lobby facade in maroon, yellow and ivory Kolorite (a structural glass product) and a tiny 2-sided letterboard and neon sign.

The architect was I. A. Zakryzewski.

The Town of Frankenmuth is a beautiful tourist town, too.

Any photos of this one?

There is an article about this theater at…
http://www.drive-ins.com/dbtcdet.htm/tc=47/pga=53

I forgot to add that this theater was torn down long ago.

According to an ad in Boxoffice magazine in September 1963, the address for the Ken Theater was 195 E. Jefferson, Frankenmuth.

The extensive write-up of the Ken Theatre in the “1947 theater catalog” on this site does not include the name of the general contractor. So we can’t be 100% sure who built the theater.

Beginning in 1948 my grandfather Albert S. “Al” Johnson shot Kodachrome slides of most of the sixty-four Michigan theaters and drive-ins that his Johnson Construction Company built - including those that he’d built prior that year. His collection includes one exterior image of the Ken, taken in June 1948. The marquee says “Comedy Carnival Color Cartoons and Shorts.” I’ve uploaded the image to this page.

Although the “Quonset hut” architecture of the building is unique, the style of the entrance is similar to other theaters built by Johnson. Whether or not Al built the Ken, he left us with a nice image from 1948.