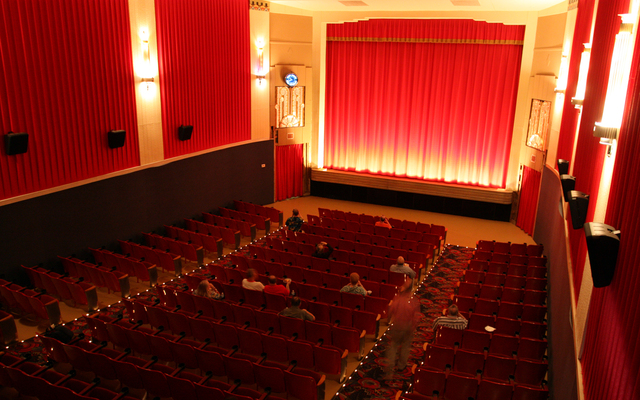 This theatre by the architectural firm of Bennett & Straight opened on December 26, 1937 with “Stella Dallas” starring Barbara Stanwyck. It underwent extensive renovation and restoration by it’s owner, Tim O'Brien.

Reopened in November 2005 and is used primarily for movies. The seating capacity was originally for 512 and is now 371. It was closed in March 2014 upon the death of the owner. It was purchased in late-2014 by Andreas Fuchs who is an Advisor and part of the Team of Cinema Treasures. The Vassar Theatre reopened January 30, 2015.

How the heck did the theater lose over 140 seats?

Sadly Vassar Theatre owner Tim O'Brien has just passed away. His funeral is to be held in the theatre.

There must be a catch. That must be just for the business. I wonder how much the rent is?

The above photo is of the Vassar Theatre, located in Vassar, Michigan. This Historic Art Decco style Theatre has been recently sold. The New Owner is Mr. Andreas Fuchs, now living in Conn. Mr. Fuchs is in the process of finalizing details to reopen the theatre. According to Mr. Fuchs the Grand Opening will be very soon!

Dear Movie buffs, this is an update on the Vassar Theatre, Vassar, Mi. Mr. Andreas Fuchs recently held a Pre-Opening event(Jan. 24-25) Vassar residents were treated to popular movies & trailers. The audience was amazed to see the theater in operation again! Mr. Fuchs was on hand to personally greet residents. This is truly a “dream come true” in every sense of the word! The Vassar Theatre will officially open on Jan. 30th for regularly scheduled popular movies. There will also be a Senior Matinee on Wednesday. The Vassar Community is proud of it’s historic Vassar Theatre & it’s new owner, Mr. Andreas Fuchs.

What a great art deco movie house. May it remain open and strong for years to come. Box office and marquee are teasures.

Greetings to all movie buffs far & wide. I am pleased to announce that the Vassar Theatre has been open now for nearly three years. Mr. Andreas Fuchs is the owner. An amazingly energetic man with a “huge” imagination. What a privilege to have him as a resident in our community. His genius has proven the Vassar Theatre a true success! We invite visitors from every state. If you are traveling this year, please stop in our little community of “Vassar”. Along, with our theatre, We have a museum dedicated to our local history, many restaurants to choose from, a kayak launch, hiking trails and much more! If you come in to our local theatre, please introduce yourself to Mr. Fuchs, he’s a wonderful host! Thank you for the honor to post this tribute to the Vassar Theatre.

The Vassar Theatre is a venue that my uncle’s preliminary research didn’t uncover as a Johnson Construction Company project, and for which my grandfather Albert S. Johnson didn’t leave behind any Kodachrome slides.

Two clues are the basis for including it in our family theater history. The first is its similarity in art moderne/deco style with other Johnson-built theaters. This includes the trademark porcelain enamel tile red and cream exterior color scheme, and the quintessential “Johnson doors” with paired half-moon shaped glass. Those doors are said to have been patented by my grandfather.

The second clue is in a September 1949 Reed City newspaper article (see uploaded article in Photos page) which lists the locations of theaters owned by the Schuckert & Stafford theater chain. The Vassar is among the six other Michigan theaters that Johnson built for that company.

The theater, located at 140 E Huron Avenue in Vassar, opened in 1937. If the Vassar was one of my grandfather’s projects, it’s one of eleven Johnson-built theaters that is still open in 2021 (Covid-19 closures notwithstanding).