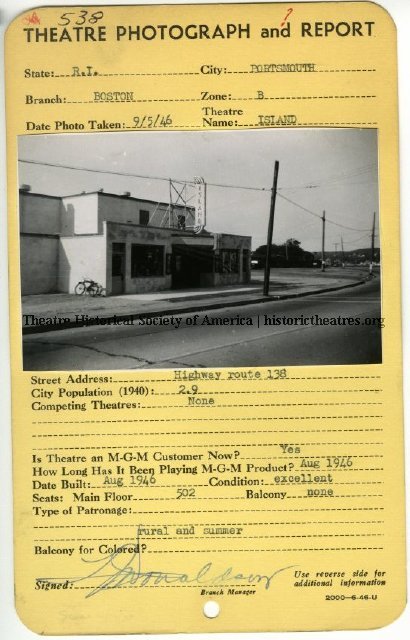 The building still exists as a boat facility. Any information about this theatre’s past would be appreciated.

According to the assessor’s database (which may not always be right) the building currently there was built in 1950. View link

This would make it to new to be the theatre, right?

Gerry, I sent an email to the address I had for you, which might be old. You’ve got great photos of all these old theatres. Can I grab them from your Photobucket site and add them to the CinemaTour site with proper credit, of course, to you?

An item in Boxoffice Magazine, July 9, 1955, states that the Island Park Theatre had closed for several months follwing a fire.

Island Theatre is Opened in Portsmouth Aug. 23
NEWPORT, R.I. – The Island Theatre, a new community project in Portsmouth, located midway between this city and Fall River, opened August 23. The new 500-seat house, equipped with the latest in projection and other equipment, is the result of the progressiveness and forethought of a Portsmouth man, Orville O. Smith, who will manage the theatre.

The Island will serve the rural community of Middletown and Tiverton, as well as Portsmouth. Construction has been in progress all summer on the house, which opened with a continuous run policy each evening with four changes a week. Provision has been made for plenty of free parking space on the theatre property on either side of the building.

This theatre has been often referred to in reports as the “Island Park” Theatre.

I biked by there the other day on a bicycle vacation. It’s just before Flo’s Crab Shack before the main road, across from the water.

I can possibly get some information on the theater. My mother grew up in the house that was directly to the left of the theater. The house is no longer there but was directly across Park Ave from the Sportsman’s Cafe. Shortly after the hurricane they moved to my great-grandmother’s house(3 or 4 houses away) I believe it was 684 Park Ave

The Theatre Historical Society archive has the MGM Theatre Report for the Island Th. It’s Card # 538. Address is “Route 138”. There is an exterior photo taken on Sept 5, 1946. Condition is Excellent. It says that it was opened August 1946, and is playing MGM films.There were 502 seats.