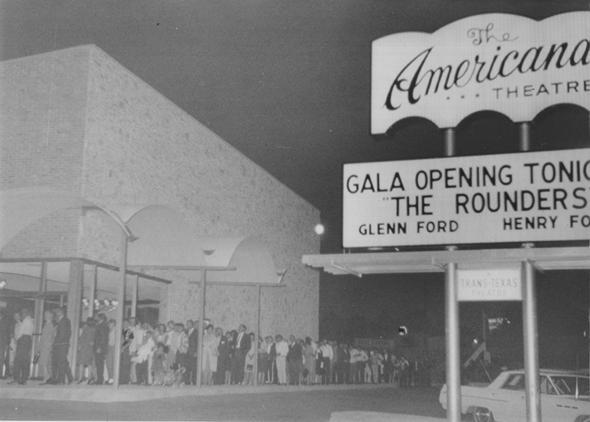 Located in the north central neighborhood of Allandale. The Americana Theatre was built by Trans-Texas Theatres and opened April 28, 1965 with Glen Ford in “The Rounders”. Designed by architect William B. Saunders, it had seating for 783 and was equipped with 35mm & 70mm projectors. Soon after its opening the Americana Theatre hosted the State Premiere of “Cat Ballou”. In the early-1970’s it was taken over by AMC theatres. The theatre featured a huge 70mm screen.

The story that goes is that the downfall of the theatre was an agreement made between AMC and Disney to give the Americana Theatre an exclusive showing on “Annie”. Disney made the agreement but stipulated it was for 18 weeks. AMC wasn’t able to get out of the contract and dug itself deep into the red and was not able to recover financially on the theatre. The Americana Theatre was closed April 5, 1987.

In 1999, the Americana Theatre was converted into the Yarborough branch of the Austin Public Library.

The Americana Theatre was built by Trans-Texas Theatres, Incorporated, Earl Podolnick, President. The Americana did not exist in 1962. It opened with a by-invitation-only screening of the 1965 film “The Rounders”, starring Glenn Ford and Henry Fonda. The grand opening feature was “The Legend of Cat Ballou”, 1965, starring Lee Marvin and Jane Fonda. The Americana’s first manager was Joe Dyer.

The Americana is featured as a backdrop in one scene of the Richard Linklater film, DAZED AND CONFUSED. The lower part of the marquee is in one scene where the guys are meeting to discuss how they are going to haze the incoming high school freshman. The name of the theater is visible in the corresponding deleted scene in the “Special Features” section of the “Flashback Edition” DVD.

pablo el sueco’s comment of Dec 21, 2005, is correct. The year after the theater opened, Boxoffice Magazine published an article about the Americana in its issue of May 16, 1966. It named Trans-Texas Theatres as the operating company, Earl Podolnick as the President of the company, and Joe Charles Dyer as the manager of the theater.

It also mentions that the theater’s decoration was designed by Earl Podolnick himself, and said that the architect of the house was William B. Saunders, of Austin. The seating capacity of the Americana was given as 783. The cost of the theater was $360,000.

The Texas premiere for “The Great Waldo Pepper” took place on Thursday March 13, 1975 at the Americana Theatre (Austin, TX) with former First Lady Ladybird Johnson and actress Susan Sarandon in attendance. At the Americana, attendees arrived in period cars & costumes. The film’s (first) premiere was at the Rivoli Theatre in New York, NY the previous night.

I waited with my parents in a line around the building to see the Empire Strikes Back on opening night! That theater holds some fond memories for me, including seeing “The treasure of the Four Crowns”, my first movie in 3D.

Nat King Cole died on 15 Feb. 1965, so I don’t think he made any personal appearances at the Americana after its opening in April 1965.

I also went with my parents to see The Empire Strikes Back, but on the 4th night it was playing. I drove to Austin 3 more times to see it at this theater rather than see it at one of the inferior local ones. It was that special a place. I also remember seeing Patton and several other films here. In my opinion, it was the best-designed theater I’ve ever been in. The screen was gigantic, curved, and had a see-through curtain that would be drawn back as the previews started. As stated, capacity was huge, so it was quite an event to see a blockbuster there with 700 other patrons. The sight lines were perfect… the floor sloped very gently down toward the screen, and the projection booth was on the same level as the entrance. The place was perfectly engineered so that the projector beam would just clear peoples' heads as it was cast onto the screen. I really wish I had the blueprints to this place, because it was a masterpiece. Nice to see that at least the building survives.

This opened on April 28th, 1965. Grand opening ad in photo section and below 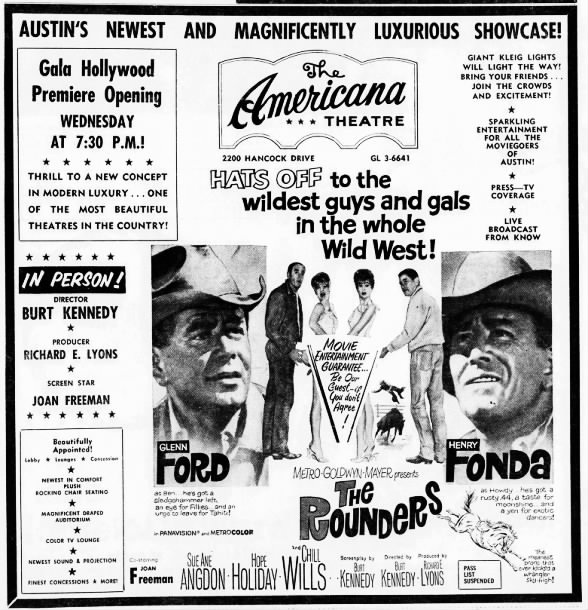 I’m passing along the link to a new historical article about large format and roadshow presentations at this and other Austin cinemas.