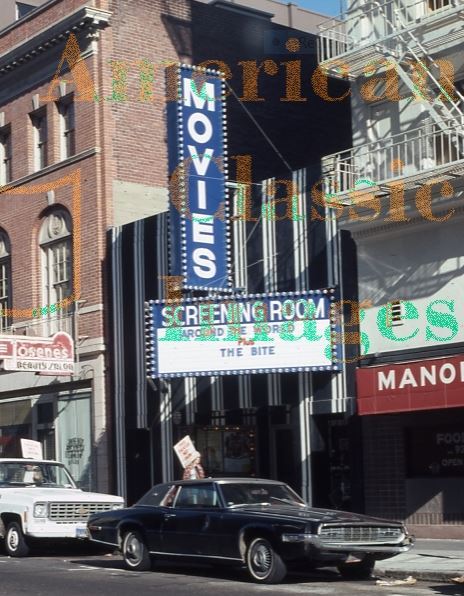 An operator changed the place to a female strip club called Chez Paree, which met some opposition from a pastor who is operating a religious school next door. It then operated as a ‘gentleman’s club’ known as Pink Diamonds. Around 2010 it became a sex club named the Power Exchange.

Some of this is inaccurate. It was not called the Campus in the early ‘80s. I was a cashier/projectionist there in 1981-1982. When I began in 1981, the theater was called The Screening Room and had been for some time. It was then a run-down porno theater catering mostly to old men. A few months into my employment, new owners, or at least new managers, from Chicago, came in and did a makeover, trying to transform it into a “hot” club that would attract a younger, trendier crowd. (This only partially happened; who wanted to go down to the dicey Tenderloin, when you could go to Folsom or Castro St. sex clubs, where the fee was also cheaper?) The place was repainted all in black and neon orange and renamed Savages. Live strip shows were held on the smallish stage below the screen. I often worked the lights from the projectionist booth upstairs. At the premiere of Savages, the porn star Richard Locke came and did a live show (and gave a safe sex talk — probably one of the first-ever). The basement was renovated and turned into a sort of sex club, with a maze, a wrestling pit with bleachers (for the “cock fight” wrestling matches), a giant bed, slings, etc. Most of the staff was wacked on meth and/or MDA. I must be the only one who didn’t die from aids or overdose.

@Lost Memory: Hey where’s the photo with the Campus displayed on the marquee? :(

The information listed above is incorrect. The name progression was Screening Room then Savages (Abdul Droubi owner) and then Campus Theatre ( Steven Downard, owner, later bought by Habib Carouba (Market Street Cinema)who kept the Campus name. After that I am not sure, as I was no longer affiliated with it. I managed the theater for a few years under both Steve Downard and Habib. I would be interested in communicating with DiscoSurvivor to share some information.

Former owner of this and Market Street Cinema has passed away.

The first ad for this cinema as “Screening room” appeared on March 2nd, 1968 in the Chronicle with “The Vampire goes courting” and Selected Beavers. Ad in photo section.

Actually, the earliest listing for the Screening Room at 220 Jones is from April 10th, 1967 with a color double bill of Sylvia’s Girls and Girls A-Poppin'. It seems to have operated as such (showcasing double bills of color features) for about two months in 1967. Then, there is a gap. Eventually, it reemerges in 1968 showcasing beavershorts. (btw, Pornography in Denmark was released in 1970, not in 1968, and it premiered at North Beach, not at the Screening Room.)

Also, should anyone be that interested the interior of the place during the Campus days can be seen in the video “New Meat 24”