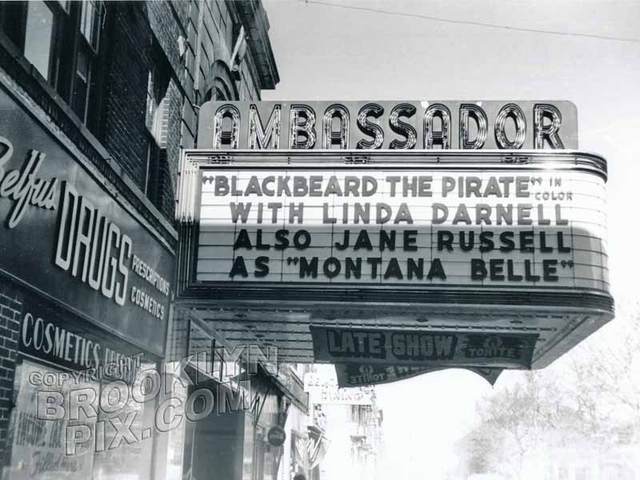 Now one of the many forgotten movie theatres of Brooklyn, the Ambassador Theatre first opened in 1926, and was built and owned by Hyman Rachmil & Samuel Rinzler, aka the Supreme Circuit. At that time, they ran seven other large neighborhood theatres in Brooklyn, including the Capitol, Carroll, Congress, Sheffield, Stadium, Stone, and Supreme. Not surprisingly, William Fox purchased the Supreme Circuit during his late-1920’s rampage to dominate the industry.

After Fox’s bankruptcy at the onset of the Depression, most of his theatres in the Greater New York-New Jersey area were placed under the debtors-controlled Metropolitan Playhouses, which created three circuits– Randforce, Skouras and Prudential– to run them. All of the Brooklyn theatres (with the exception of the downtown Fox) went to Randforce, which was to be run by Sam Rinzler, one of the former owners of Supreme.

I used to go to the Ambassador every Sunday in the early 1960’s. A double feature was 35 cents. On special events, like when I saw the “Three Stooges” in person and “Chubby Checker” it would be 50 cents.

It was a great theatre with a smoking balcony. To an 8 year old it looked enormous. The concession stand was to the left as you entered the theatre. Right next door to it was a delicatessen…it sold great knishes. Across the street, on Saratoga Ave., was another restaurant. On the opposite side of the theatre, on Livonia Avenue was a toy store. Betsy Head park was just one block down Livonia and Saratoga. A few blocks away was the big shopping area of Pitkin Avenue.

You definitely could not hear the IRT # 2 train. The last stop on this train in Brooklyn was New Lots Ave. (intersecting with Ashford Street).

Although the neighborhood was quickly changing for the worse, I was able to walk to the Ambassador from 245 Amboy Street (between Dumont and Blake Avenue) all by myself and my younger brother with no fear or concern. With just $2.00, my brother and I were able to purchase tickets, buy popcorn, soda and candies.

I have great memories of the Ambassador. I believe by the very early 70’s it was closed. It’s a shame that it was torn down. Although by the late 60’s it looked horrible on the outside.

I do have a photo of the corner across the street where the restaurant was, ca. 1961.

I went to the Ambassador in the ‘50s and also, less frequently, to the Pitkin. At the Ambassador there was a children’s section, with a matron who did not hesitate to shine her flashlight on boisterous kids,, and that was where we were required to sit. The Saturday show included two movies (if I remember correctly) and cartoons and a newsreel. I went with my brother, who was two years older than me. We walked from Hegeman Avenue and East 98th Street, near Beth-El (Brookdale) hospital. There were no problems with crime at that time.

You could not hear the IRT – but, then, if you lived near the IRT, as many people did, you learned not to hear it. I went there quite often growing up – one of the treats was that it was air conditioned (air-cooled?) in the summer. The luncheonette across the street was the Murder Inc. headquarters in the 1930s and 40s.

My older cousin took me to a rock and roll show at the Paramount when I was a child – I remember standing on the seat.

Thanks, Anna Stern and Jose, for posting your memories.

Anna Stern, what rock and roll acts did you see at the Bklyn Paramount as a child, and what did you think about them ?

I went to the Ambassador theater in the 1940s. I was thirteen plus at the time.
Saturday morning my mother would give me twenty five cents and I would walk
from Rockaway Parkway to Saratoga and Livonia avenues,(we didnâ€™t own a car).
The admission was ten cents for cartoons, a serial usually Flash Gordon or Dick Tracy or Buck Rogers,Movie-Tone News,two feature films, the first was a western the second a comedy or musical.
In between films there would be a raffle for a schwinn bicycle.
Come to think of it I never saw anybody win (hmmm :–))
After the movie I would go next door to Goldfrieds deli and spend the balance
of my fifteen cents for two hot dogs and a bottle of Pepsi (five cents each)
So from 10-am to 5pm on saturday my mother knew where I was and in good
hands of the matron with a flaslight walking the aisles to make sure nobody
got out of hand.

These kind of saturdays were probably some of the best days of my life.
To bad the younger generation of today donâ€™t experience those kind of days.

Thanks, jack martin, for posting your Ambassador Theater movie memories from the 1940’s. They are very special and important, and I enjoyed reading them.

Was the roar of the IRT el on Livonia ever a distraction ?

Have you looked at the images of the Ambassador Theater on nycsubway.org that I’ve posted links to, in my post dated May 12, 2004 near the top of this page ?

The roar of the IRT going by never distracted us,except when the victim was laying on
the floor and was just about to tell us who (shot,stabbed,hit him with a club,threw him down the stairs)
And then we would try to read his lips.

Viewed the pictures on nycsubway.org but can’t really see the theater.

I grew up on Grafton Street in the 1930s and the Ambassador was the “go-to” destination on Saturday afternoons. Admission was 10 cents for kids, but during WWII, a penny “war tax” was added. Many times, a Filipino yo-yo expert would perform remarkable tricks on stage with that popular toy. Friday nights were “dish nights,” and my parents would attend the show as much to add a piece to our dinnerware as see a double feature. They also played “Screeno” in which patrons holding lucky number tickets would get to pop balloons containing mostly $1 bills, but there would be a $5 or $10. For my own first Friday night attendance, at the age of 10 in 1939, mom and dad took me to see Walt Disney’s “Snow White and the Seven Dwarfs.” When my kid sister was old enough, I’d take her with me and we’d dine at the Chinese restaurant two doors down. Our lunches and movie admissions came to less than $1.

I lived in Brownsville, ‘51 – '57, on Saratoga and Riverdale. The Ambassador was the regular “nabes.” Saturday mornings and afternoons were for kids—3 features, 26 cartoons, pogo stick given away, etc. Fierce matrons armed with six-battery flashlights. Manager was Herman Semel, white moustache, always dressed in impeccable tuxedo, undeviating hostility to kids.

I lived in Strauss between Livonia and Riverdale till 1961. I was not allowed to cross the street, but was able to go across Livonia and Saratoga by using the Saratoga Station stairs. Unfortunately there were only three staircases and could not go to the Ambassador on my own.