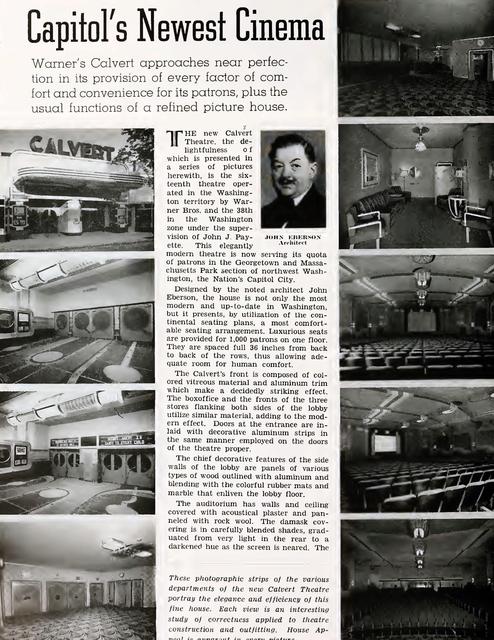 The Calvert Theater was one of the many John Eberson-designed movie houses in Washington, DC. It opened on May 6, 1937 with Errol Flynn in “The Prince and the Pauper”. It was leased to Warner Brothers, who operated it for many years.

Taken over by Mann Theatres in July 1963, the Calvert Theater closed in 1967 and was later demolished. Its screen was removed after it was closed and installed at the Georgetown Theater.

Im Looking for any exterior photos of the old Calvert. HELP
Thanks Bill

Among the movies which I saw for the first time at the Calvert were “Vertigo”, “Rodan”, “Invaders From Mars”, “Cleopatra”, “How The West Was Won”, “The Blob”, and no doubt many others. Saturday matinees were thirty-five cents in the latter part of the 1950s.

Going to the Calvert Theatre was alot of fun during my high school years….As one of the “Avenue Boys” we usually spent the day playing ball at Jelleff’s Boys Club just down the street..
One night stands out..when our buddy…nicknamed “Jughead” …..got alittle too loud and rowdy during a ‘62 showing of “The Man Who Shot Liberty Valence”……and we were asked to leave the premises.

The Calvert began an on-again/off-again first-fun policy with “The Small World of Sammy Lee” on 9/20/63.

“Marnie” which opened in multiple theaters that included the Calvert
was the first Alfred Hitcock film not to be shown in a downtown theater.

Most of the films ran from one to three weeks. ‘The Slender Thread" and “Viva Maria” both ran for four weeks. “The Easy Life” ran for six weeks.

“The Slender Thread opened in 1/66. Sorry about the typo

I remember this theater as a kid in the 1960’s shortly before being torn down for Pearsons Liquors parking lot. We used to enjoy a double feature,both with Peter Sellers, aThe Pink Panther and a Shot in the Dark. Peter was wild. Capucine hysterical in the hotel scene and David Nivens with that wonderful Italian actress.