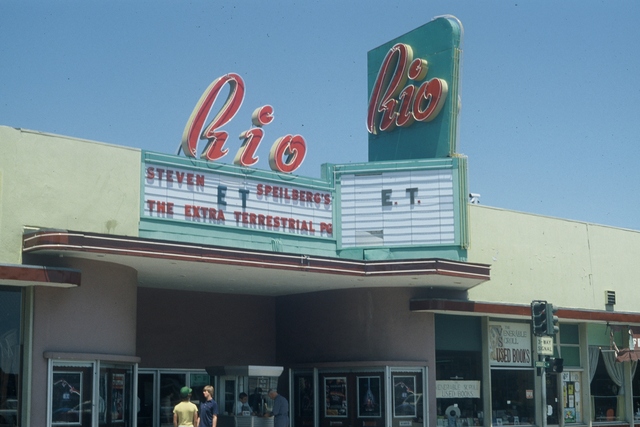 The Rio Theatre, which was built in 1949, has now reopened as a performing arts center and screens documentary movies. The Rio Theatre was purchased from United Artists before the giant theater chain filed for bankruptcy.

Though it has been converted for live performance use, the Rio is still capable of showing movies, and does so on occasion. The exterior still remains exactly as in the 1984 photograph by Jack Tillmany above, with one improvement—that being that the yellow neon on the spine of the vertical sign fin which was missing in 1984 has been replaced. Indeed, all of the neon is in good working order. While there isn’t much to see decoratively inside the Rio, the lobby, with its undulating curved walls and tiered ceiling lit indirectly with pink neon cove lighting is a feature I’ve always enjoyed, as this is one of my childhood theatres.
In 1983, my cousin and I planned to catch “Return of the Jedi” there on opening day. He was in Junior High, and I was in Junior College. We both cut out of our classes early, and took the city bus from Aptos to Santa Cruz and the Rio. We weren’t able to get tickets to that day’s very first showing, so we settled for the second showing, and took our places in line, only to be eventually met by my Mom coming out of the first showing, wearing an “I beat you guys to it!” grin. Unbeknownst to us, she had gone down there early in the day to get into the first show! We were quite astonished. I also remember that while we were waiting in line someone had brought colored chalk and was drawing swirling abstract art all over the sidewalk to pass the time and amuse bystanders while we were all in line.
During the last few years of UA ownership, someone got the bright idea of removing the lovely tiered lotus-shaped Moderne wall fixtures in the auditorium and replacing them with new fixtures. Fortunately, the original fixtures weren’t thrown away, but put in storage in the Del Mar Theatre downtown. With the recent ongoing restoration of the Del Mar, they have now taken their place in that theatre’s auditorium and lobby, where they replace long-missing fixtures which were similar.

I first attended the Rio in 1975, for a revival of “2001: A Space Odyssey,” paired with the European animated science fiction fantasy, “Fantastic Planet.” At this time the Rio’s auditorium was draped in crimson soundfold, and this is the look I knew during all the years I went to shows there. However, a longtime resident of the Santa Cruz area said that before the soundfold was applied to the walls, there were murals depicting women being attended by nymphs or putti or somesuch. I’m wondering if anyone will ever confirm the existence of these murals. I remember the tiered lotus wall fixtures with lighting in red and blue that I mentioned in an earlier post, and there was originally a blue-lit neon clock to the right of the screen. Also, during my earliest visits there, overstuffed couches still remained in the lobby, and there was at least one framed painting on the wall, which was clearly of 1940s vintage, depicting a vase and a bowl of fruit. Also, there was a mirror mounted in the front of the concession stand, which had a silkscreened image of a smiling woman, advertising a soft drink, probably Coca-Cola. The mirror was suffering from some oxydation of the silver and paint on its back.

If one looks closely at the first of the two photos linked to Lost Memory’s April 27 post, a hand painted poster in the display case can be seen, inviting Mothers to make use of the Rio’s Cry Room. I remember this poster, which was hand painted. I have no idea how old it was. Usually it was displayed in a freestanding poster case in the lobby, just inside the entrance doors to the left as you walked in.

According to the history page on this theater’s official website, this theater was specifically built to house a “Cycloramic” screen and opened as the Rio Cycloramic Theatre. The screen was supposed to create the illusion of depth. It sounds a great deal like Cinerama. Does anyone know anything about these Cycloramic screens?

I just heard from a friend who heard on Santa Cruz radio station KSCO that last night a driver crashed into the entrance of the Rio, taking out the ticket booth and plowing into the front doors. He then got out of the car and killed himself. More on this if I hear about it.

CSWalczak: The 3D Film Archive says that the Cycloramic screen was introduced in 1949 for a revival of a big screen projection process from the 1920s called Magnascope. The page features this trade journal advertisement for B. F. Shearer featuring the Starke Cycloramic Screen. As the Rio was built in 1949, the timing was right for it to have been a Cycloramic house. B. F. Shearer was the leading theater supply company in the west for decades, and probably supplied the furnishings and equipment for the Rio.

Cyclorama is, of course, also the name of the large, white, usually concave backdrops that have been used in stage theaters since the 19th century.

Visited The Rio just after New Year’s to see Patti Smith perform. It was incredible! And the venue has been nicely maintained. I snapped some photos of the marquee, ticket booth, & lobby which I will upload here shortly.

Functions should include films: documentaries.