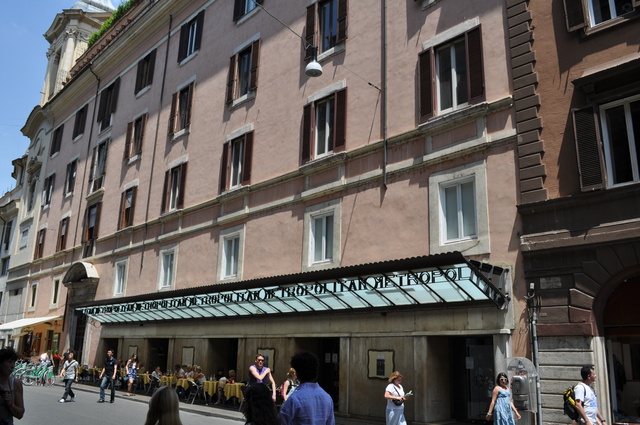 The Cinema Metropolitan has for many decades been one of the premiere movie theatres in Rome. Along with the Cinema Barberini, this theatre was at one time owned by the father of Roberto Rossellini, and the director has spoken of getting much of his cinematic education by being able to attend movies for free at the two theatres.

Originally opened as the single screen Cinema America in 1911, by 1940 it was operating as the Cinema Gloria. It was re-named Cinema Metropolitan in 1948. The venue was converted into a four-screen theatre in the 1990’s. Seating capacities in the screens are:150, 150, 150 and 100. Its location is near the beginning of the Via del Corso, the main street of Rome, which runs from the Piazza del Popolo (the theatre is right near it) to the monument to Italian unification in Piazza Venezia.

The Cinema Metropolitan was operated by the Circuito Cinema chain and was part of the Europa Cinemas group. It was closed in 2010. In the summer of 2014, plans were announced to convert the building into retail use, that will also include a small cinema.

Fotografia favolosa! Ed anche for your photos of Siena’s Cinema Alessandro, Providence’s RKO Albee, and NYC’s Beacon in previous posts. Thanks. Any more?

Bill-
Yes, a few more as I dig through my photos.

When the 1961 Luciano Salce film Il federale (The Fascist) opened at the Metropolitan, the audiences were so large that the normally closed third balcony had to be opened to meet the demand. This information is given on the Italian DVD for the movie. Il federale featured Ugo Tognazzi, Georges Wilson, and Stefania Sandrelli.

The Rome first run engagement of De Sica’s “Ladri di biciclette” (The Bicycle Thief/Bicycle Thieves) started here and at the Barberini on November 24, 1948.

It should be noted that a previous name for this cinema was the Gloria.

As the Cinema Gloria on May 18, 1940, the program had two American films: “Le 3 ragazze in gamba crescono”(Three Smart Girls Grow Up) with Deanna Durbin and “Allora la sposo io” (The Rage of Paris) with Danielle Darrieux.

This recent report says the Metropolitan, closed for 10 years now, may be slated for restructuring for commercial use and perhaps an auditorium for general cultural use. https://www.radiocolonna.it/economia/2019/07/24/cinema-metropolitan-forse-finita-la-sua-lunga-agonia/