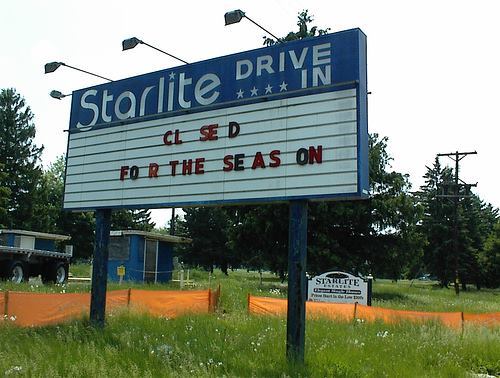 National Amusements, the parent company of Viacom, closed the Starlite Drive-In in April, 2001 and in 2004 it was razed, and replaced by housing.

I saw many epics at this theater, including Ben-Hur, El CID, and King of Kings. Such a shame it was razed, but that’s life.

I ran the Starlite dr-in 1974-75 & remodeled the snack bar. It was owned by National Amusements or Redstone Theatres. I also managed the Bethlehem Dr-in for a while in the 1970’s for the same company. I remember a time when Walter Fatzinger the projectionist couldn’t get a picture on the screen because someone stuffed a popcorn tub in the proj. porthole…

I am slowly restoring an old car I bought last year and just found some old papers under the front seat. One of those papers is a kind of “frequent flyer” card handed out by this theater. The card is partially rotted away but seems to say that if you pay to watch 6 movies you get to watch the 7th for free. This card has only the “1” punched and a rubber-stamped August 25, 1966 in black ink. I guess my old Dodge spent some time at the Starlite Drive-In! I’d include an image if I could but that doesn’t seem to be possible. Also, the theater address as shown on the card is simply “alternate Route 22 — Easton”

The address for this theater is actually 3330 Freemansburg Ave, Easton, PA 18045. This points to the entrance of the drive in. Parts of the imprint of that road remain. There is a Starlight Drive and Movie Circle in the theater’s place.

This was probably the sale that led to the renaming. It makes me believe that Billboard’s drive-in columnist got some of his news by phone.

Billboard, Oct. 23, 1954: “At Bethlehem, Pa., Eastern (sic) Medina Drive-In Realty Corporation bought the Eastern (sic) Medina Drive-In for $75,000. It had been operated by Essex Amusement Corporation, Newark, N. J. The 32-acre property was sold by Harry Appleman, Brooklyn, the principal owner. It has been announced that proposed improvements for the spot include installation of CinemaScope equipment.”