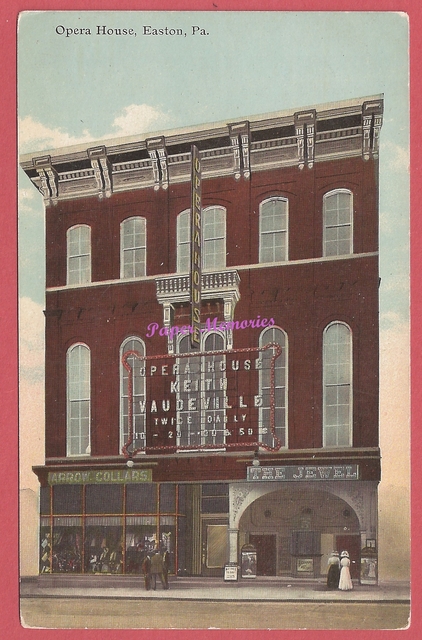 The Abel Opera House was opened in the 1890’s. In 1907, John A. Schwalm and C.S. Rothleder opened the Jewel Theatre ‘inside’ the Abel Opera House. It was the largest theatre in the area with over 1,000 seats and played Keith’s Vaudeville. It suffered a fire in 1924 and another fire in 1926 when it was operated by Wilmer & Vincent Corp.. In 1927 it was redesigned by architect William Harold Lee and was converted into a movie theatre, renamed Embassy Theatre. The Embassy Theatre was closed in May 1966.

My mother used to point out the old Siegals Department Store building on Northampton Street in Easton and say it was once the Embassy Theatre and she went to movies there in the 1950’s.

The Embassy Theatre, at 342-350 Northampton St. in Easton, was the site of the former Abel Opera House. The opera house presented many dramatic and operatic companies in the late 19th century and early 20th century. A large lodge room and two stores also comprised the historic building. In an Easton Express article written by John Bonnell in 1957, Bonnell said the building’s site was one of the most historic in the city.Admission was 25 cents in June 1913 for those patrons who wished to see Thomas Edison’s talking pictures during Old Home Week. Two fires struck the theater in a little more than two years. One fire was started by a discarded cigarette on June 12, 1924. The second occurred March 26, 1926, due to defective wiring. Around that time, the operators decided to turn the place of “live” theater into a movie house. The last movies played at The Embassy in May 1966. “When Gangland Strikes” and “Doctor at Sea” brought an end to an era in Easton. The property was sold to Arthur P. Siegal to be transformed into a ladies apparel store.
From the Easton Express Times, Nov 5, 2005. online edition.

This theatre first opened in 1907 as “The Jewel Theatre”