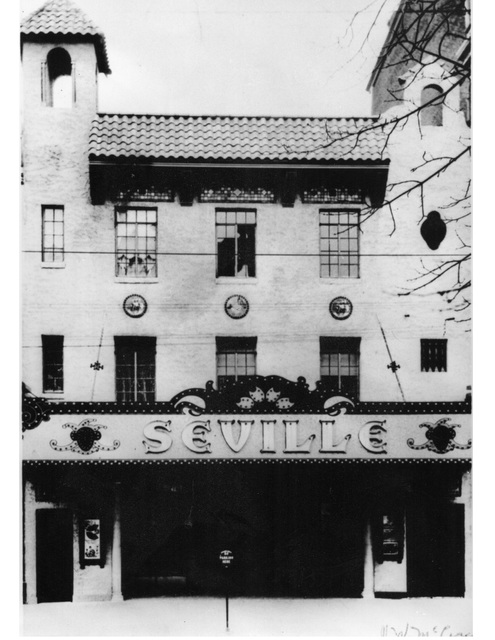 The Seville Theatre opened on February 21, 1929, for vaudeville and movies. The first movie shown was “The Redskin” starring Richard Dix. The theatre was designed in a Spanish Atmospheric style by architects Benjamin Lackey and Joseph Hettel. It was known as the Boyd Theatre from 1933 (also for a time the New Boyd Theatre) when it was purchased by Boyd Enterprises, led by Alexander Boyd who had built Philadelphia’s Boyd Theatre.

It was purchased in January 1971 by Easton businessmen who wished to raze it for parking. More than 1,500 residents signed a petition hoping to retain the theatre for entertainment. However, after showing “The Ten Commandments” the theatre closed on May 24 1972 and it was razed.

The last operator of the Boyd in Easton PA was Angstadt and Wolfe Theatres. Richard Wolfe now runs the Cinema Treasures favorite (featured in the new book)the Roxy Theatre in Northampton Pennsylvania.

1969 photo of the Boyd Theatre via American Classics.
View link

This photo is incorrectly labeled Allentown. Mr. Wolfe sets us straight as below (his comment elsewhere copied & pasted here)

The photo that you posted above is not the Boyd in Allentown, Pa., but rather the Boyd Theatre in EASTON, Pa.

I had posted this info once before, and notice now that it has been removed. This photo had been attached to the Easton posting, but is now gone from there and has for some reason returned here.

Not all listings on americanclassicimages are correct.

I know the theatre in that photo only too well, as I had my first theatre job there as an usher, and latter leased the theatre. I was the final operator, having closed it in May of 1972 when I lost my lease when it had been purchased by E-Park to be demolished for a parking lot.
posted by RickWolfe on Jul 31, 2009 at 5:15pm