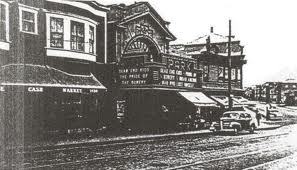 The Park Theatre opened on December 13, 1920. One of the number of lost theatres of Fall River. Any information on it would be appreciated.

The Park Theatre was located in the southern section of Fall River known as the “Globe”. It had a sister theatre, “The Strand”, located in the eastern part of the city known as the “Flint”. Both theaters would show first-run movies that had previously been shown at Fall River’s premier Durfee Theatre. A ubiquitous Dunkin Donuts now occupies the site.

The Park Theatre, built by Nathan Yamins, opened on December 13, 1920 and supplied the residents of Globe Corners with a movie house of their own. The first film shown was the tear-jerker Everybody’s Sweetheart, with Olive Thomas. South End postmaster James Arkinson addressed the first audience at the Park. The Park was completely renovated in the fall of 1942 and was said to be one of the most modern theatres in southern New England. The Park had push-back seats so that patrons would not have to get up to let someone pass.

In later years manager Joseph Gosciminski drew larger crowds through promotional ideas such as “Ladies' Dish Night” on Wednesdays. For 35c admission, women would see the show and receive a dish to add to a set.

It was not uncommon to have up to 1800 children in the audience watching Shirley Temple or a western on Saturday afternoons. For 10 cents kids would get an admission and a free five-cent ice cream. The theatre was like a baby-sitter for parents. Their kids could be safely sent off to a matinee at 1 P.M., with a bag lunch, and remain at the movies until 8 P.M. through two complete shows.

During the showing of All Quiet on the Western Front, manager Gosciminski rented a shotgun, which he would fire into a barrel, making a sound like a cannon…and creating holes in the floor!

Joe also would let a child in for free if the kid approached him and said he had no money to buy a ticket.

(Information synthesized from various articles in the clippings file on Fall River theatres at the Fall River Library.)

Here is a very poor photo of the Park Theatre in 1941. PHOTO

The MGM Theatre Photograph and Report form for the Park has an exterior photo which is posted just above. It’s not clear if that photo was made in May 1941 or Sept. 1946. The Report states that the Park is at 1425 South Main St., that it had been playing MGM films for over 10 years, that it was in Good condition, and had 1152 seats on the main floor and 510 in the balcony, total: 1,662 seats. There is a note: “renovations made within last couple of years, and house now in good condition.”.

The Park is listed in the 1927 Film Daily Yearbook as having 2300 seats and open daily. The seat count seems too high.

PARK THEATRE PHOTO IN MGM REPORT, 1941 Thanks to Theatre Historical Society of America.

Circa 1930 photo added via Raymond Storey.