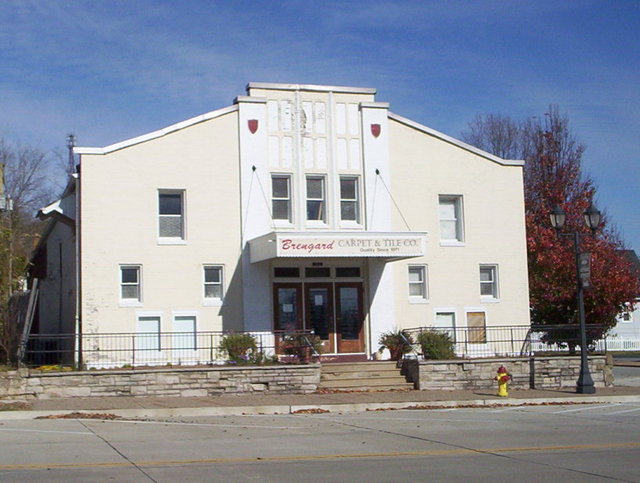 The Royal Theater was built in 1928, replacing an earlier Royal Theater. This is a medium-size theater which is mostly intact on the outside. Brick construction, with an understated Tudor influence. The poster display windows (unusually low-set) now contain linoleum samples. No idea how well preserved the interior is.

May have closed in 1971, which is when current tenants, a carpet and tile store, appear to have moved in.

I was told that this theatre was open on and off again until the early 1980’s. In 2001, the theatre was converted into a retail flooring store. The stage was demolished, the projection equipment was removed, and a second floor was partially added. The equipment I removed was very much from 1953. It was like a time warp. Unfortunately, I-44 had forced the traffic away from downtown and destroyed the viability of this theatre.

The flooring store still has a few theater seats and a ticket machine on display in what was the theater lobby. And yes, it was in business long past 1970.

I did an article about the Royal for the Pacific Current newspaper in 1994. A family had begun holding variety shows in the theater. I will try to post it here.

“It was a brief era, as golden ages go, swept in on a floodtide of splendor, fantastic architecture, music, laughter and dreams. It began and ended in the decade that lay between Prohibition and Depression, and it brought pleasure and escape from boredom to a whole generation of Americans who wanted desperately to believe in make-believe."
— Ben Hall, The Best Remaining Seats, 1961.

Thanks Western Watcher for a great story.

The Royal Theatre dates back into at least the mid-1920’s when it was listed as open.

The original Royal Theatre in Pacific was in operation by 1913, and was frequently mentioned in the Pacific Transcript. The paper also noted in its issue of August 24, 1928, that construction had started on the new Royal Theatre. The August 6 issue of The Film Daily had reported that St. Louis architectural firm Gill & Jackson had prepared the plans for the new theater about to begin construction at Pacific.