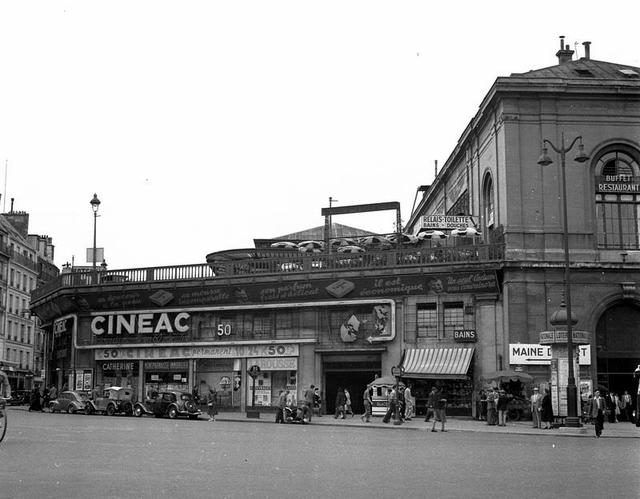 In 1933, the second Cineac chain newsreel cinema was built in the Gare Montparnasse (railway station), under the old station.

The architectural firm de Montaut & Gorska, created a very interesting Art Deco design. On the facade of the station, a huge neon sign and neon arrows invited patrons to a large corridor. The floor made of tiles was a masterpiece and the lobby had two large windows one showing the air conditionning system the other on a higher level the projection booth.

The auditorium had a very fine Art Deco design too, and a space at the rear for standing viewers. The screen was high enough to avoid the problem of permanent traffic on the aisles.

Until the end of the 1960’s, this amazing place was not altered by any refurbushing, only a CinemaScope screen was added. But in the 1970’s, the old railway station was razed, and the Cineac vanished.

“…Every week, after coming out of school, we would go to the Cineac Cinema (found in the former Montparnasse train station). Here, we would watch strange and popular films and serials such as Tom Mix in The Miracle Rider, Mysterious Doctor Satan, Zorro Fighting Legion or Nyoka and the Tiger Men. The projections of these films were often interrupted by the public address system of the train station, announcing the arrival or departures of trains. Travellers entered or exited the cinema theatre as if they were in a waiting lobby. If there was ever such a thing as Dadaist cinema session, then the screenings at the Cineac were it!”