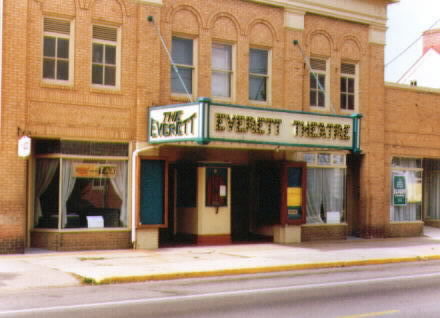 The Civil War was a fresh memory when Middletown’s first stage opened in 1863. Back then it was known as the Masonic Hall and Opera House and it flourished as a performing arts cultural center and community meeting place until falling in a spectacular fire in 1918.

Determined that history would not repeat itself, a shining structure built mostly of concrete and plaster was rebuilt on the site where the others had fallen. It was November 9, 1922, when crowds were first treated to a glimpse inside the magnificent new 600-seat Everett Theatre. Designed by noted theatre architects Hoffman-Henon Co., this would be a favorite place for everyone in the area to enjoy those new motion pictures as well as the more traditional vaudeville stage performances.

For decades, the Everett Theatre flourished. Those who once stared wide-eyed at the movie screen as children were back again with children of their own. Slowly, drive-ins, shopping malls and television took their toll and the Everett Theatre dimmed its lights and shut its doors in 1979.

For the next four years, it sat silently on Middletown’s W. Main Street, its fine acoustics untested and its beautiful interior crumbling. Thankfully, a group of concerned citizens formed Associated Community Talents, Inc., a non-profit corporation, and purchased the Everett Theatre in 1983, determined to restore Middletown and the Everett Theatre to once again become the center for the performing arts for the community. Renovation and fundraising began.

Today, continuing the tradition of over a century, the Everett Theatre is alive with people and productions that once again bring the world to Middletown. The newly refurbished stage has welcomed the best of Broadway including productions of “Barefoot in the Park”, the steamy “Cat on A Hot Tin Roof”, the raunchy and ribald “Plaza Suite”, and the poignant moments of “Steel Magnolias”, just to name a few.

There’s nothing more exciting than watching the house lights dim, the curtain go up, and the overture begin as you, the audience, prepare to enjoy a wide range of musical production numbers from ‘Bali Hai’ in “South Pacific”, to the robust ‘Drinking Song’ in “The Student Prince”, to the haunting ‘I Don’t Know How to Love Him’ from “Jesus Christ Superstar”.

And the theatre tradition begins young in Middletown as the annual Childrens Theatre Workshop introduces children and teens to the thrill of grease paint, footlights, dance, music and drama, both on and off stage.

If you’ve seen “Dead Poets Society” starring Robin Williams, you’ve seen our beloved Everett Theatre featured in the film. And the movies still roll at the Everett Theatre, offering a top-of-the-line projection system with Dolby sound and one of the largest movies screens on the Delmarva Peninsula. Movies from “Forrest Gump” to “Schindler’s List” to the larger than life “Titanic” and the all too real “Saving Private Ryan” have brought the Everett Theatre movie screen to life.

The theatre is also the proud home of a Rogers Trio Organ which is used when showing the early silent films and is also available for concert use and as a prelude to live productions.

The community is proud of the Everett Theatre’s spot on the National Register of Historic Places and cultural arts in all shapes and sizes live on within her walls. Vaudeville lives again through the appearance of local players and community talent, from youngsters to the young at heart, creating riotous, foot stomping, belly laughing and chaotic on-stage reviews. It is now home to special arts programs for the children, the Delaware Theater Association’s annual play festival, movies, concerts, recitals and lectures. In short, it is once again the center for cultural and artistic “happenings” in the Middletown, Odessa and Townsend area.

The Everett Theater hosts a variety of activities. One of the things I enjoy most about the theater is that it hosts re-releases of classic films. Unfortunately these special movie events are normally presented one showing, one night only and are rarely advertised well in advance.

Two years ago we were at the Everett and enjoyed a wonderfully restored print of IT’S A WONDERFUL LIFE. Unfortunately the short notice advertisements have meant that my family and I have missed showings of THE WIZARD OF OZ, MIRACLE ON 34TH STREET, and GETTYSBURG to name a few.

We were driving home from D.C. last week and we passed right by this little jewel ! If I were driving I would have crashed the car ! They were showing “House of Wax” in 3-D ! In Brooklyn they’ve all been destroyed, but lookee here in Delaware !

I was an extra when they shot Dead Poets Society there in the fall of 1988…Beautiful theatre…glad they have kept it up! Now if only the REST of main street in Middletown got the same attention- it has such GREAT potential.

We are well on our way to reopening(phase one). Bid documents have been distributed and advertisements for other bidders is being done. Also we are awaiting decisions on grant applications to suppliment Insurance payments. Donations may be sent to EVERETT RESTORATION FUND 45 W. Main Middletown, DE 19709. We are a 501©3 nonprofit organization. Donations are TAX DEDUCTIBLE. We have been presenting
planned shows in other venues while the theatre is closed for repairs.

The EVERETT THEATRE Middle town, Delaware Re awakened from her 14 month sleep in May, 2009 with a “Curtains Up” black tie Gala on May 8, a “Curtains Up!” thank you show on may 9, The EVERETT CHORALE Spring concert “ America Sings”, and a Cartoon Family nigth at the movies on may22 and 23. She is all Spiffed up on the Inside from Phase One construction and looking forward to Movies, Plays, Musicals, an her 25th year of Children’s Summer Theatre Workshop,
ACT, Inc Wishes to thank everyone Who contributed to the SAVE THE EVERETT CAMPAIGN, without whoe help, none of this would have been possible.
The Everett eagerly awaits future phases of restoration.

a belated congrats to the Everett Theatre for getting back up on its feet. It’s a wonderful theater, and I’ve had the chance to perform there during the Peach Festival.

The George M Schwartz chain from Dover Delaware operated the Everett Theatre in Middletown Delaware from some time in at least the 1950’s until the mid 1970’s.

HowardBHaasHowardBHaas on January 23, 2022 at 7:04 am (remove) I posted 10 photos. Last night, with 2 friends, drove from Philadelphia and enjoyed “The Man Who Shot Liberty Valance” (1962) projected in 35mm via 1938 Simplex projectors & carbon arc projection, a rarity now anywhere in the world! Classic movies done right! The organ played, intro was given, vintage trailers & shorts, the curtain opened, movie was shown. Movie was only $6, popcorn was only $2.