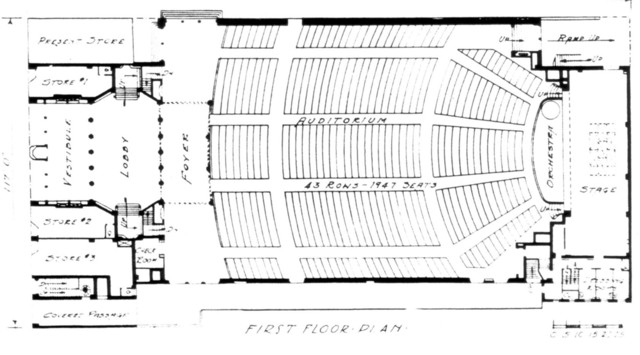 Designed by architect Ralph Bencker with Thomas W. Lamb as consultant, the State Theatre was one of the most magnificent Art Deco style movie palaces ever built, but its location in western Philadelphia was too far from downtown and disqualified it from first-run status. Instead of being at the very top of the balcony, the projection booth was housed in the center of the mezzanine section of seats, which created a superior screen image and permitted better spotlighting for stage shows. By 1950 the State Theatre was operated by William Goldman Theaters Inc.

The State Theatre was demolished in 1967, and today a McDonalds Restaurant stands on the site. Four pages of black and white photographs can be found in “Philadelphia Theaters”, by Irvin R. Glazer.

I barely remember being taken there as a kid to see Old Yeller in 1959. There were 3 other theaters on 52nd St in West Phila during that time: The Nixon, where I saw everything from “Hercules Unchained "to "Our Man Flint”, at 52nd and Market; The Locust, known for their triple bills on Saturdays (“Guns of Navarone –” Great Escape" – “The Train”)
at 52nd and Locust, and The Capitol, at 52nd just above Girard Av, where I saw “The Silencers” and “Hombre”. The State was the biggest and best of the bunch, but closed before the others, and they all played second-run double and triple bills.

By the 1980’s urban blight and multiplexes killed off these “neighborhood” theaters.

Here is an undated photo:
http://tinyurl.com/ysqnb4

Is that demolition date correct? I think the State may have been around slightly longer than 1967, possibly ‘68 or even '69.

No answer right now, but
Google search exactly
Boxoffice 3 June 1950
put 125 in the search box
for photo of State exterior with “She Wore a Yellow Ribbon” on the marquee.

I recall the shuttered building but not the marquee, but the interior was indeed fabulous from what I viewed in the Irwin Glazer book. It may have been removed as a safety precaution before the demolition, or maybe age is eroding my memory.

SIDENOTE: Is there any info regarding the old Eric Terminal Theater in the 69th St. El/Bus Terminal?

From 1950 a newsprint photo of the State Theatre marquee and entrance.

i read in the colonial theatre history the state kimball organ was installed by jim breneman at the brookline theatre in 1967 but was heavly damaged by the flood of 1973. the organ went to the colonial theatre then was purchased by sam larosa a organ restorer then gave this organ to the chicago historical society. ill post a copy of this article

August 29th, 1929 grand opening ad along with the Circle in the photo section.