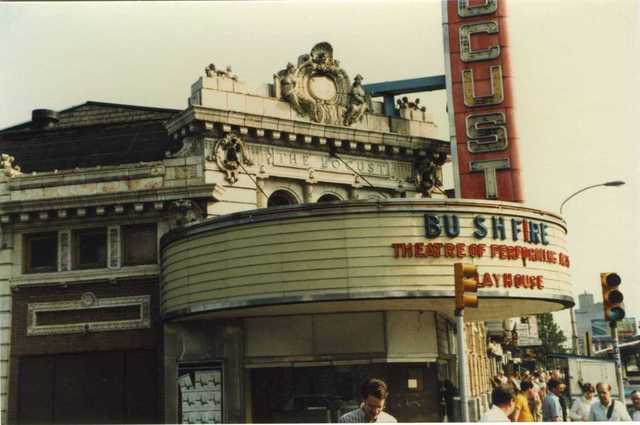 In 1977, the Bushfire Performing Arts Group acquired the Locust Theatre, and renamed it the Bushfire Theatre.

As the Locust, it was operated by Henry Sley, a parking lot magnate who had also acquired the downtown Aldine and renamed it the Viking. In 1961 the Locust got embroiled in an interesting legal tangle with United Artists. This was back when double-features were still around, and Mr. Sley managed to book, you won’t believe this, both “Gone With The Wind” and “By Love Possessed” (115 minutes) on the same bill. United Artists balked. Can you blame them? One could have spent an entire afternoon there!

Here is a contemporary view:
http://tinyurl.com/qlakqp

Does anyone have any pictures of this when it was the Locust?

Hey Veyoung52 I spent many an afternoon at the Locust during the mid to late 1960’s. On Saturdays they had 3 features for the price of one. The first movie they would only show once, then there was the regular double feature. But the first movie was always something like The Great Escape or Guns of Navarone or some other big blockbuster of the time. The Locust didn’t do those cheapie horror flicks and spaghetti westerns on Saturdays like the Nixon and Capitol did, it was always the big hollywood action flick, and i was totally into it.

The Locust opened with 1,400 seats. As the Bushfire Theatre, it now has 428 seats. No mention as to the discrepancy. Does anyone know?