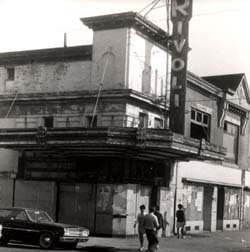 The 52nd Street Theatre was built in 1909 on the corner of S. 52nd Street and Sansom Street. The architect is listed as Jacob Nasehold. It had a 17ft deep stage. The name was changed to the Rivoli Theatre in 1920 and it was equipped with a 3 manual Marr & Colton organ. The Rivoli Theatre closed in 1930 an became an indoor golf course. This later lased and it reopened as the Rivoli Theatre again until closing as a movie theatre in the 1960’s. It went over to live theatre use by a local repertory company. This closed in 1970 and it was demolished later that year. A library was built on the site.

The thing I remember about the Rivoli was that the marquee displayed odd, home made looking wooden letters that slid into wooden tracks. By the 1960’s from the street the theater looked lost and old fashoned among the other 52nd street houses. Even the closed ones!

Not a great photo, but the Rivoli marquee can be seen on the right. Date is 1950.
http://tinyurl.com/qy8l26

Here is a photo circaa 1960s from the Irvin Glazer theater collection:
http://tinyurl.com/ylgdrtr

According to an item in the December 1, 1909, issue of The American Architect, the 95x107-foot store and moving picture theater building being built at Sansom and 52nd Streets, which architect Jacob Nasehold had designed, was being built for Samuel Wheeler. The February 14, 1914, issue of The Moving Picture World had this bit of information about Mr. Wheeler:

“WE comment specially upon the election of Mr. Samuel Wheeler as President of the State League of Pennsylvania, because it is typical of the remarkable improvement of the personnel of the exhibitor. Mr. Wheeler has a substantial stake in the exhibiting business. He is the owner of a chain of prosperous motion picture theaters in the city of Philadelphia. He is an attorney, and has on more than one occasion asserted the rights of the exhibitor in the courts of his state. He is essentially constructive. He has exalted ideals of the mission and the responsibility of the exhibitor. He is progressive, and places the welfare of the exhibitors' organization above any consideration of self. We congratulate the exhibitors of Pennsylvania upon their excellent choice.”

“Samuel Wheeler, who owns and operates the Fifty-second Street theater, has arranged to build a new moving picture house at the corner of Fifty-second and Market streets. This will make two houses that he owns within a short distance of the Nixon theater. He opened the Fifty-second street house before the Nixon was completed, and when that house got running he switched to pictures and made money. Now he will build a new house still nearer than his former one, to the Nixon, and will arrange it so that he can add vaudeville as an attraction in case pictures do not get the money he expects.”

I had thought that the house at 52nd and Market might have been the mysterious Grand, which operated only for a few years, but an item about Samuel Wheeler’s retirement from the theater business in the September 4, 1915, issue of The Moving Picture World says that he owned the Belmont Theatre, which was up the block from Market Street, but didn’t mention the Grand.