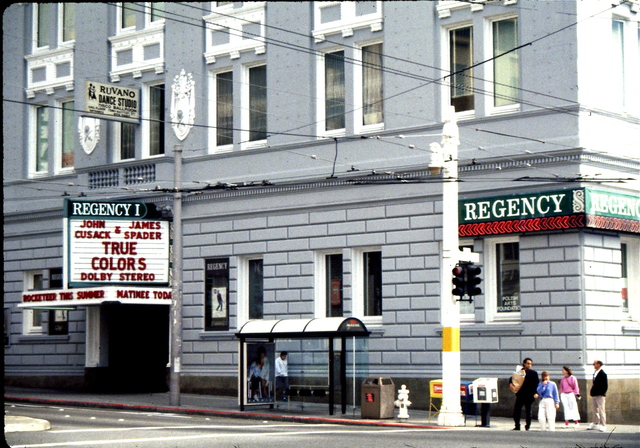 The Regency 1 opened on December 22, 1967, with “The Birds, the Bees and the Italians”. Built in 1911 as the Scottish Rite Temple, it had been remodelled into a theatre by Blumenfeld Enterprises, and reigned as one of San Francisco leading first run theatres for thirty years.

With lots of problems which made it less than user friendly (stairs up to the entrance could not be accommodated by the disabled; limited waiting room inside made it necessary for crowds to line up outside on Van Ness Avenue, despite inclement weather; a narrow proscenium meant top masking had to lowered to provide a proper wide screen ratio; a flat floor meant sight line problems for those sitting in back; and, to make matters worse, the manager and her daughter/assistant had a little too much attitude for their own good), blockbuster films meant turnaway audiences year in and year out, despite, rather than because of, the venue.

Maybe to a trekkie, martyrdom made seeing “Star Trek: the Motion Picture” all the more pleasurable, but by the mid-1990’s the Regency’s (and its manager’s days as Queen of Van Ness Avenue were definitely over as a movie theatre, and it closed forever on November 7, 1998.

4 every1 on here 2 know, Mrs. Stimmel was my grandmother. She passed away this yr on January 25, 2013. She lived a great life, I loved all my memories @ that theater when she was manager. All the workers were always nice. I was very sad when she retired, but more sad when it closed down. & she definitely had an attitude. Lol. RIP GRANDMA. U’ll be missed but never 4gottin. :) ~Ur loving granddaughter Shirley Stimmel~

Mrs. Stimmel was always very kind and gracious to me when I went to see a movie at the Regency. (I was an employee of another chain) My feeling was that she was a person who respected those that demonstrated respect for her. I am sorry to hear of her passing.

My grandfatherJoe Blumenfeld created Regency I (& II) and I worked there in 1979 – 1982. He owned many theaters. When I was young Pearl’s tough facade scared me. When I grew up I understood Pearl. She had the highest standards of any manager we ever had. And she took no sh&t from no one. Once she learned that I respected her rules and her operation – she became like a 2nd mother to me. I am so sorry to hear of her passing. She was a special lady and holds a special place in my ❤. Those that say negative things about her unfortunately did not know her – or – deserved what she did to them (and yes – she would throw you out if you pressed your luck). After my grandfather passed in 1982 my uncles carried on the operation until its ultimate demise. Pearl was always welcome. The Regency theaters were classic theaters that movie goers loved for many years. OJ Simpson and Al Michaels once came to watch Nick Nolte and Mac Davis in North Dallas Forty and I got autographs. Sylvester Stallone came to the grand opening of Rocky I and Pearl took great care of him. Despite their flaws, these theaters were a part of the rich and diverse culture that made San Francisco great in that era – now gone.

I think it was this theatre that I saw Good Morning Vietnam. The seats and walls were all in green. Plus it had a balcony that wrapped around to the side walls. Nobody was sitting on the side balcony as it was not very deep and maybe didn’t have any seats. Was it this theatre?

I can’t remember the color of the seats or walls inside the auditorium but yes, there was a narrow balcony that wrapped around the sides and rear of it. The lobby and waiting area on the Van Ness Ave side as I recall was quite ornate with green and purple paisley wallpaper and chandeliers hanging from the ceiling. I saw quite a few films at this theatre and loved going to the bargain matinees in the 70’s. Don’t remember much of a rake to the floor in the auditorium and the acoustics were not very good but this was a really popular theatre that really pulled the crowds in. The last film I saw here was Evita in the mid 90’s.

While in High School, my buddy Pete Smith and I worked at the Regency I in 1975, 1976 for the Stimmel’s; Pearl and Shirly. Pearl was a wonderful lady who managed with an iron-fist. She taught me many things that I used as a business owner, later in life (one being, when it’s slow, …CLEAN!) She was a tiny lady, but like a chihuahua, her bark was worse than her bite. With sell-out crowds for months on end, you learned to respect the fact that she always had control. She taught me how to deal with large crowds. Pearl managed M-S and her daughter, Shirley was the Sunday manager. It was a treat to work sundays with Shirley and you had to work your way to her good graces in order to be on her crew. This included the projectionists, Rebel (Reb) and I would have long conversations waiting for the projector change. Sylvester Stallone did not visit the theater, Pearl traveled to LA and met him in Hollywood at a private showing for theater-owners. She came back smitten and excited about the movie. Since it was a first-run theater, at the time we had just finished a 6-month run of One Flew Over the Cucoo’s Nest. I remember going to Winterland on a friday night to see ELO, on Saturday I was working the matinee and 3 members of the band came to see the Cucoo’s Nest. I recognized them in line and said “I had a great time at your concert last night, and, hey, I can get you in for free”. (with Pearl’s blessing) So, on their way out they stopped and said thanks and got me on the list for backstage for the Saturday Night concert. Pearl was not usually star-struck, but that changed when Katherine Hepburn also came to see a matinee of Rocky in 1976. (She was appearing as Mrs. Basil in the touring company of “A Matter of Gravity). One evening, after we had just closed the Box-office, Pearl had already gone to the office and Francis Ford Coppola came with an entourage of a half a dozen people. I ran to the office and told Mrs. Stimmel that Francis Ford Coppola was outside and he wanted to see the movie, so she re-opened the box office, charged them normal price. He was just back from the Phillippines filming "Apocalypse Now” and his Sister played Rocky’s love interest, Adrian. Knowing this tid-bit, as I was tearing his ticket, I made the comment to Mr. Coppola “Oh, you came to see your sister Talia in the movie!” (pronouncing it Till-ia). He looked at me and said, “It’s TAL-ia”, took his ticket and walked in. They bought Rocky t-shirts, popcorn and sodas for everybody in the group. Once, the film distributor inadvertently sent “Little Big Man” to the Regency. So Pearl decided to have an after-hours showing for staff and friends. We all watched from the balcony, just outside the projection booth and took turns switching over reels. The greatest perk of working there was that the Stimmels would call any theater in SF to get you in for free. (Pearl seemed to know ALL the managers city-wide, Shirley even knew the Mitchell Bros. but I was too young for the O'Farrell :)

Wheelbarrowjohnny, I was only in this movie theater once, since I live in Philly, but I really enjoyed reading your post! And, as an official volunteer for this website, I read a lot of comments that don’t really say anything about the theater or its history, but yours really does give us so many interesting tidbits, so thanks!

This was to be opened on November 22nd, 1967, but delayed until December 22nd. Ad in photo section.

The building is on the market for sale or lease. If you click on the link Regency and scroll down to “Watch the Drone Tour” and click on the image you will be taken virtually through this entire amazing building.