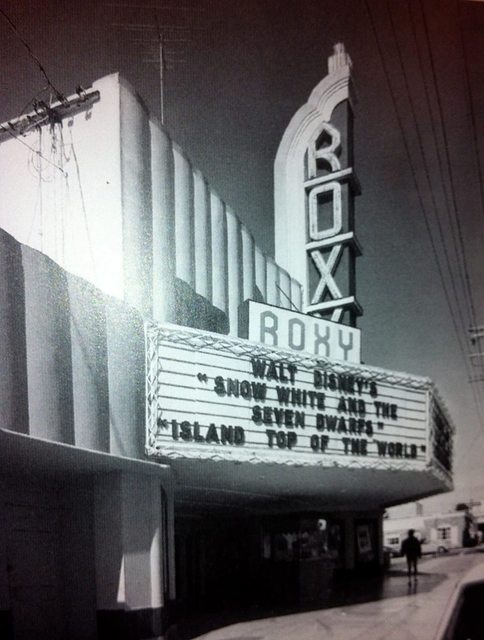 I disagree with the opening comment above that the Roxy operated only until 1978. I got to San Diego with my wife 12/78 and attended various shows until 1980 B.C. (Before Children).

Located in the city’s Pacific Beach section, the theater split its time between screening art/erotic films and being a live rock music venue (with Fahn & Silva as local promoters). Can’t lay my hands on the photos that I took c. 1979 of the Roxy’s north wall, featuring murals of W.C. Fields, Marilyn Monroe and others, but hopefully some local resident might have saved a postcard copy, regularly sold back then at places such as Sav-On’s, Long’s and Thrifty’s, to scan and post here.

It was a very sad day in the early ‘80s when the Roxy was eventually demolished, reduced to a pile of chalk-white rubble a mere three blocks from the silver-blue Pacific.

I agree with Brooklyn Jim. The Roxy was around until at least 1982. During its last days it was no longer a movie house and being used for bands. The Police played their first show in San Diego here in 1978 or ‘79. It was demolished to make room for a new post office.

The Roxy in PB may have had 750 seats when it was mainly a movie theater, but it was cut back to 629 seats in its later concert configuration. Here’s an excerpt from an upcoming San Diego Reader article about long-gone local concert venues.

In November 1980, PBâ€™s Roxy Theater at 4642 Cass Street was pereparing to close its own doors to both concerts and movie screenings. Roxy owner Scott Shore had bought the venue in 1977, originally planning to operate it as a movie theater, until local distributors refused or were unable to provide first-run films.

The venue was converted to a 629-seater for concerts, which were booked by local promoter Marc Berman from summer 1978 until August 1979. This period saw acts playing the theater such as Lou Reed, Blondie, Iggy Pop, Dire Straits, and a 5/16/79 Police concert that was broadcast on KGB 101.5, becoming one of the bandâ€™s most well-regarded bootlegs.

After Berman departed for bigger ventures, the Roxy was leased to Concert Nite Productions through early 1980, whereupon owner Shore terminated the lease amidst allegations of unpaid rent and incomplete building improvements.

Local concert promoters Fahn and Silva Presents booked the Roxy occasionally from March through August â€™80, and then the theater spent months screening the adults-only film Caligula. In November 1980, Shore reportedly sold the site for around one million dollars. The building was demolished to make way for a new post office, which opened in 1984.

I can tell you something about the Old Roxy Theater. I lived up in the Claremont area just above PB back in the late 50’s and 60’s. Used to go there for the matinees usually two movies and between the movies they would have a drawing for a bike or BB gun up on the movie stage. Those were the good old days. No muss no fuss no fights. Just us kids going to the movies and enjoying it. I left San Diego about 10 years ago and moved to Texas because of my job. Really miss San Diego.

I enjoyed many movies at the Roxy when I was growing up, but my best experiences there were concerts. I had the pleasure of seeing Leo Kottke there, and on another occasion, Kenny Rankin. Great performances! The Mark Almond Band was slated to perform there also, but they disintegrated before the date.

This was my favorite theater growing up. I knew that it wasn’t in the same class as the glorious Roxy in New York, but the fact that it shared the name, had some small hint of art deco decoration in the architecture, made it something special, something that someone had taken just a little trouble to dignify. I remember seeing the last theatrical release of “Song of the South” there, also Steve McQueen’s moto-cross film “On Any Sunday,” and – coming into my own at the tender age of about 14 or 15, I remember seeing a double bill of “Casablanca” and “To Have and Have Not” one foggy autumn evening. The fact that my mum dropped me off and picked me up in the family station wagon made me feel no less Bogey-ish, love-injured and world weary. Even at that tender age. I was a young-fogey even then.

Loma Usher, you should become a writer your words are articulate and wise for such a young individual! Maybe write some scripts for my cousin!

I had the priviledge of attending a concert there. I got to see “Jan and Dean”. Place was packed. Jan was having a hard time on stage. A great show none the less.

Bonnie Raitt’s band appeared at the Roxy not too long before it was demolished. Great show! I was surprised by her kick-ass guitar playing.