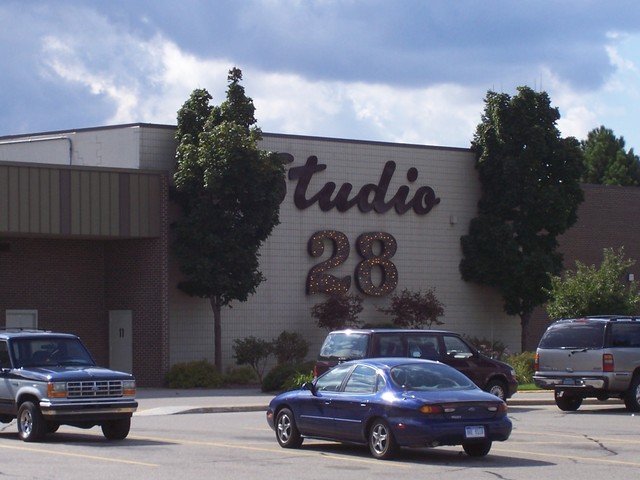 The interior is a little like those IMAX theaters with the neon lights and the like. They have an arcade room, and three concession stands (one in front of the arcade room, one in the far left when you first enter the theater, and one in the far back of the theater). The people there give you good service, too. This theater is also one that enforces their rule policies in the middle of previews before their feature presentation (I’ve seen them since my first time in that place since 1992, which was just a man talking while you see nothing but stars in space, in around 1995 they changed design and went with “The Ten Commandments” look with rules like “Thou shalt not talk during the film”. They stopped showing them sometime in 2001 and then ressurected it with more stars and firecrackers in around 2003). And they make one of their main rules known by having the announcer say in a booming voice “NO TALKING”.

Due to a fall in attendance, Loeks Theatres announced that Studio 28 would close on November 27, 2008. It was demolished in March 2014.

I really miss this place – saw a lot of movies here in my two years in Grand Rapids, and I remember how packed it could get in Theater #1 on opening night. One of the best cinemas ever – I’m sorry it couldn’t last.

Hard to believe, but it’s now been exactly one year since the closing.

There is another marquee photo on this site. Status should be changed to closed.
http://tinyurl.com/y8j3cfg

Has anything been done at the building, I am not in GR, not easy to do a drive by… thanks,,,,,

PS I do miss theatre #1, the HUGE curved screen and THX…

Nice way to go out on Marquee,so many theatres never have the chance.

Did they strip and demolish this theater? did someone open across the street that was all stadium?

This is another cinema called Studio 28 in Paris, France. http://www.cinemastudio28.com/horaire.asp no connection with the theatre in Grand Rapids.

The location of this theater is currently in the city of Wyoming, not Grand Rapids. Granted, Wyoming didn’t become a city until 1959, but this theater was never inside the GR city limits.