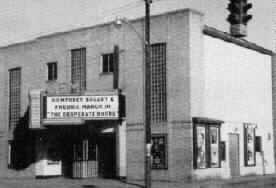 The Gem Theatre seated 516 and opened in a conversion of a former grocery store on January 15, 1942 with Leon Weaver in “Tuxedo Junction”. It was closed sometime in the 1950’s. It has a white brick front and the white bricks stretch down the sides about 20 feet and then turn to red brick. It has a small V shaped marquee. The box office was in the middle with a set of doors to each side. When looking in the lobby was completely gutted.

I lived in Caruthersville, during the 80’s and early 90’s. The GEM was open then. It showed 2nd run movies. The seats were red and rocked. It closed sometime in the 90’s not the 50’s. It was not white brick. The one just up the street is probably the one you are referring to. IT was called the Stadium, I think. The GEM had been a grocery store before becoming a theater.

Caruthersville at one time had 3 operating theaters. The Rodgers on 3rd st, the Stadium and Gem on Ward Ave. Both Stadium and Gem were in the same block. All gone now. Stadium is still standing but is now a woodworking shop.

From the 1990s photo of the Gem linked by lostmemory, it is clear that the red brick sidewalls of the theater building were much older than the white brick front. Its possible that the 1936 opening date for the Gem was actually a reopening of a remodeled and perhaps renamed theater.

It’s also possible that the Gem was the theater mentioned in the May 20, 1916, issue of The American Contractor:

. The Gem appears to be about 40 feet wide, and the airdome could have been on the adjacent parcel where a smaller building shows in the 1990s photo. However, various issues of The Moving Picture World from 1918 name three movie theaters then operating in Caruthers; the Exchange, the Dixie, and the Liberty. Any of these might have been the 1916 project, but any of them might also have been the Gem under an earlier name.

Architect M. E. Worcester also designed a theater in Cape Girardeau in 1916, though I’ve been unable to track down its name or discover if the project was ever carried out.

Joe, I believe you are correct. When the Stadium is included on CT I will link the photos to the proper theater.

I actually went to headstart in the building pictured above in 1978. I lived a block behind this building during that time frame so I know for sure it was not being ran as a theatre at that time. It was on the corner of 11th and Ward.

An April 19, 2008, post in the Caruthersville forum at Topix said that the Gem Theatre had been torn down a couple of months earlier.

The Saturday, January 17, 1942, issue of the Blytheville, Arkansas Courier-News said that the Rodgers theater circuit had opened the Gem Theatre in Caruthersville the previous Thursday. It wasn’t clear from the item if the Gem was then new or if it had just been taken over and reopened by Rodgers. The item also said that the opening of the Gem gave Caruthersville four operating theaters, but it only mentioned the Rodgers Theatre and the Stadium Theatre.

“A new theater is being erected in Caruthersville, Mo., to be operated by I. W. Rodgers & Co. It will be christened the Gem Theater.”

1942 is the first year the Gem appears in the Film Daily Yearbook. It was also the first year for the Stadium Theatre and for a 286-seat house called the Cozy Theatre, which was listed as closed. The Cozy must have been the fourth theater mentioned in the newspaper item.

Here is a photo of the Gem Theatre taken in the late 1990s.

L.W. Rodgers & Co. Theatre Circuit launched the Gem Theatre on January 15, 1942 with the film, “Tuxedo Junction.” The venue was built in the Pierce Building – formerly a grocery store – which was gutted and expanded for the Gem. The Rodgers Theatre became the second-run house operating primarily on weekends.

The Pierce Building conversion project actually dated back to the Strand Amusement Company of Tennessee acquiring the property in 1937 to build a theater. That project stalled and Rodgers – who was in the process of building a completely new theater – took on the languishing Pierce project.