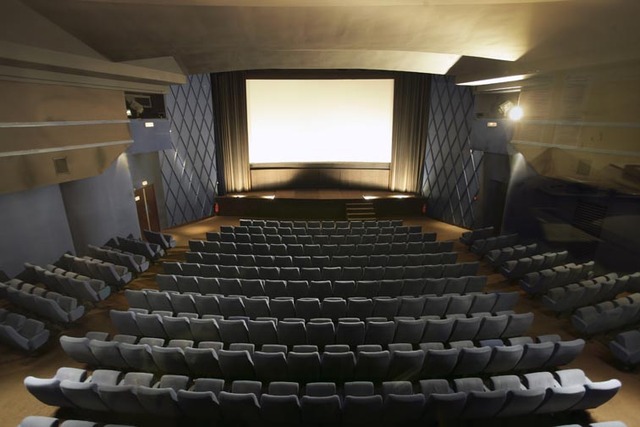 Located in the south of the city centre. In 1930 a very impressive Art Deco style building was built by Radio Electric Company to the designs of architects Albert Laprade & Leon Bazin. This building was considered as a masterpiece of architecture in many magazines for its modernity, originally called the Lux, it had a large entrance which led to the underground 500 seat auditorium.

The fine Art Deco style design with a brown and white colour scheme remained up until the end of the 1960’s. There was a bar on one side of the auditorium and a large window on the other side showing the air conditioning system.

In order to convert the Lux into the Arlequin, a major refurbishing to the plans of architect M. Georges Peynet took place in May 1972, and the original Art Deco design vanished, as well as a wide screen installed.

“West Side Story”, after a long run at the Georges V continued at the Arlequin for years. Around the 1980’s a new owner gave a new name, the Cosmos for a new policy of exclusive Russian movies and a 70mm Russian projector was installed. Operated by an art film chain and again named the Arlequin, the movie theatre was renovated in the 1990’s returning to the pre-Cosmos décor with blue colours and “Roman” curtain and a screen curtain.

In 2001, two more screens were added with 102 and 98 seats, taking over the space of a night club (the former famous Rose Rouge of the 1950’s). During 2003 summer season a 70mm print festival with Hitchcock’s “Vertigo” and Jacques Tati’s “Play Time” was an occasion to enjoy the fine stereo sound and wide screen of the 395 seat auditorium.

By 2022 the original main auditorium of the Arlequin was the only cinema in Paris equipped to screen 70mm films.

In 1962 this modern cinema was started by filmmaker Jacques Tati. Here he showed his masterpieces like Jour de FÃªte, in the colour version, and Playtime, on 70 mm. Between 1978 and 1991 L'Arlequin was renamed Le Cosmos and was the official cinema for Soviet films. Nowadays it’s one of the major art cinemas of Paris. Source: Lesecransdeparis.fr.

For a recent photo of the front at night.

Photographs from July and November 2012.