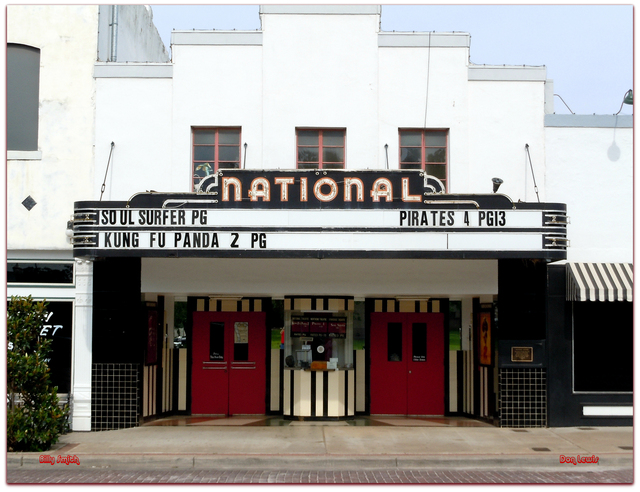 David and Pam Scott have transformed this old theater into the Graham’s entertainment hotspot. By restoring the city’s historic National Theater, they built an entertainment complex that has revitalized the downtown area.

Before the transformation, the 81-year-old theater was an eyesore of dilapidation. The Scotts bought the theater for $50,000 and quickly spent an additional $100,000 restoring the National. The theater re-opened in November 1990. And in 1993, it was listed in the National Register of Historic Places. Since the theater was doing so well, they decided to purchase the building next door and install a second screen, restaurant, and a mini-golf course.

Since the reopening, money has poured into downtown Graham, with over $6 million spent in renovations.

I first read about you in American Profile. My wife and I am also from a small Texas town (Luling) where there is an old theatre, but this one had become a factory in 1974. We bought it to save it and it is now an antique mall. We had to spend hundreds of hours cleaning and repairing. I would like to talk to you about the golf and other things you have done. Would you send me your e-mail address? My law practice also has supported what we are doing with the Stanley Theatre.

The National Theatre is located at 524 Oak Street, when it was a single screen theatre it seated 500 people.

Photo at this link:
View link

A good photo of the National Theater in Graham.

From 1972 a photo of the National Theater in Graham.