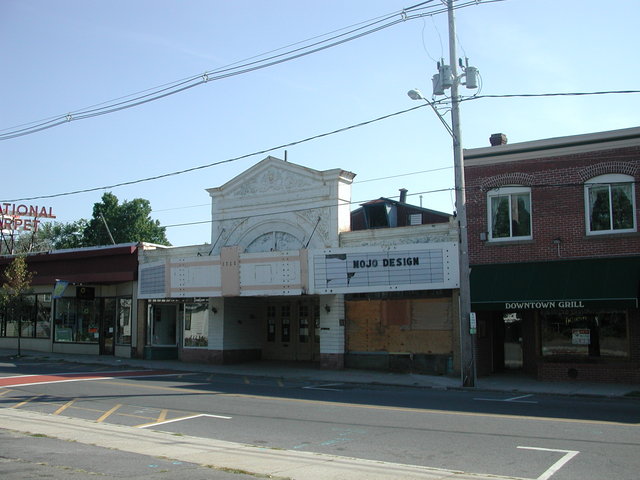 In the 1980’s, competition from the video industry took business from the adult theater and it closed in 1986. The 9,000 square-foot theater had been on the real estate market for years after it closed, with a brief stint in the early-1990’s as a dance hall.

The theater was later sold to a local furniture maker who converted the theater into a workshop for Nojo Design in 2001.

The Majestic Theatre was located on Cottage Street and it seated 800 people.

Thanks Roger, very highly renovate-able, this is in great condition and they should have kept it. I wonder what it will look like when it is finished. They seem happy to poke fun at the poor theater the marquee read “Coming Soon: A Paint Job”. I find it unique how the projection booth was out of the way to the side.

Wow, the theater is very much intact except for the auditorium floor and plaster walls.

my wife’s grandfather was the projectionist for the Majestic in the early 1920s. His brother was an early, if not the original, owner. Both were Polish immigransts. Family members worked selling tickets, resulting in my wife’s father seeing some free movies. I have a photo (poor quality) of the lobby from early 1950s. is there any other early history available?

This is my third attempt to tell you that the theatre was owned by my Uncle Stefan Rapalus. He built the Majestic in the early 20’s to replace one which burned down. My father Ignatius Rapalus and MY Uncle Wallace were occasional projectionists. Stefan’s family ran the theatre. Cousin Joe, manager; cousins Helen and Emma ticket sellers; cousin Mitch wa all around handy man and projectionist. I managed to get a lot of free passes if I had a note from my father. Lots of nostalgia there. I lived on Cottage Street across the street from the majestic. I must be related to the person whose grandfather was a projectionist. Ted Rapalus

The 1942-43 edition of the Motion Picture Almanac has a very long list of movie theatre circuits in US and Canada which consist of at least 5 theatres. Among them is Rapalus Theatres whose address is this theatre, the Majestic in Easthampton. Joseph S. Rapalus is listed as General Manager and Film Buyer. The 4 other theatres in the circuit are the Opera House in Bondsville, the Bijou in Holyoke, the Burr in Ludlow, and the Capitol in Monson.

Our grandfather, Henry Walz, built the original Majestic in 1910 at 73 Cottage Street, at the site of the current building. Eventually it had six bowling lanes and a shuffleboard court in the basement. The theater itself had box seats, a balcony, a stage, and a capacity of over 800. The theater was run by William Friel, who paid Henry a rent of $75/week according to ledgers from the first half of 1912. In todayâ€™s dollars, that works out to $72,000 per year in rental fees, a hefty sum. In addition to movies, the Majestic featured vaudeville acts. Henry sold the Majestic in 1917 for $30,000 ($482K in todayâ€™s dollars), and it burned down on Feb. 4, 1922. We own a stage backdrop of one of the incarnations of this theatre, and it will be donated to the Easthampton (MA) Historical Society, which already has interior photographs donated by our father. We also have a postcard showing the 1910 Majestic; we will send a scan to this site when it becomes possible again.

The Majestic is listed in the 1927 Film Daily Yearbook with 845 seats and open daily. They also list 2 other movie venues in Easthampton: “Mfg. Co.” with 918 seats, open 4 days/week; and “W. Boylston”. I guess that “Mfg. Co.” may have been a company auditorium.