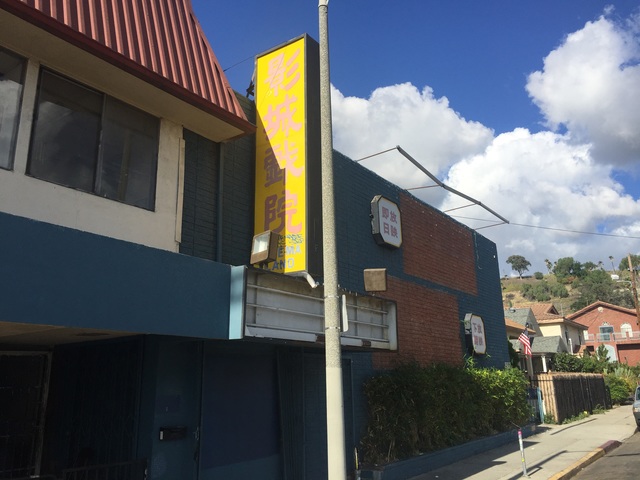 This theatre, located in the Chinatown part of Los Angeles, is now in use as a workshop.

When to Pho 78 today and notices this theatre. It’s definitely still there, but shuttered. Will see if I can get some pic next time.

This theatre used to show Hong Kong movies. I remember seeing some of those HK movies here, including “Enter the Dragon” I think, back in the 1970’s. Not only that, but I kind of remember seeing Bruce Lee’s other movies here too, which included the uncut Cantonese/Mandarin versions of:

I kind of remember “The Game of Death” and Jet Li’s “Shaolin Temple” being shown here, but I don’t think that I saw those back then.

I also remember seeing the following HK movies at the Cinemaland/Royal Pagoda:

I think that Jackie Chan appeared here when “the Big Brawl” came out.

No, no, there’s nothing there. I went over there a couple months ago to check it out. There’s still a sign reading “Cinemaland.” The front door is locked.

I went around to the back of the building and peeked inside. The door was jammed open. Everything had been ripped out. No seats, everything down to the bare walls.

There was a sweatshop inside. About 3 dozen Asian women sewing things.

I suppose you could rebuild a theater in this space, but it would cost too much, and not too many people live in this part of Chinatown anyway.

The 25,000 sq. ft. building on this parcel (starting with the address 1011 North Broadway and extending to the corner of Cottage Home Street) was built in 1962, with an effectively-built date of 1964, according the the L.A. County Assessor’s office.

The exterior remains intact as of June 2015. Didn’t appear much was going on inside as the place was securely locked and the area, as shown in the photograph, was quite deserted. I remember seeing a movie there in the summer of 1989.

Widows' Village was the movie I saw at Cinemaland in the summer of 1989. It had generated a lot of attention in China earlier that year because it was the first mainland-made movie to have sex scenes. The story itself featured some bizarre local customs that were probably the film’s selling points since the tale didn’t conform to the official narrative of Communist liberation from capitalist oppressors:

In 1949, a small Chinese fishing village populated almost entirely by women awaits the establishment of a government by the newly victorious communist regime. In addition to other worries, the villagers wonder how the government will react to their traditional customs, which decree that wives may only see their husbands three times a year, and the circumstances under which they are permitted to become pregant are very limited. In addition, those who are caught violating these rules are drowned. The almost exclusively female population of the village is explained by the fact that most of the male population died during an ocean storm.