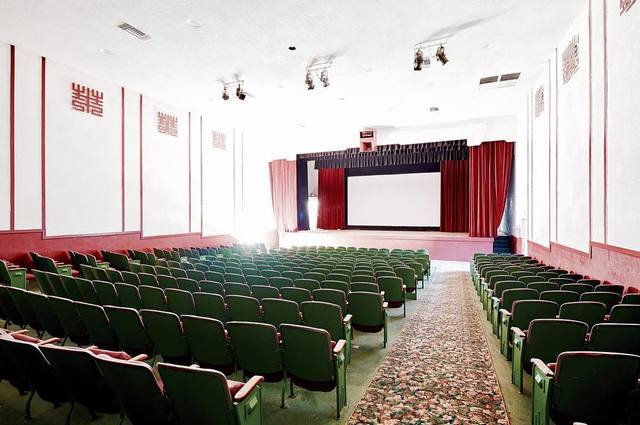 Vacant since 1996, this house (referred to in some texts as the Hui Ken International Corp.) may be part of the downtown Los Angeles revival due to Quentin Tarantino’s desire to reopen the theatre and show Chinese and related films. Built in the 1960’s, the Los Angeles Downtown News reports that “the owner will absorb the costs of bringing the structure up to code, and Tarantino will pay for refurbished sound and projection systems.

In addition to the theatre, Tarantino will have access to hundreds of Chinese films, some little-seen classics, that are stored on the property and belong to the theatre’s owner. Tarantino has agreed to catalog them, and restore them if he chooses to screen them.

By early-2009, no progress had been made on begining a restoration, and the building is empty and unused.

It’s possible to peek through the blinds and see that there are a bunch of canisters stacked up on top of each other in the front room. I’m sure the sunlight and fluctuations in temperature are not good for the films. I hope the renovation happens soon. In the meantime, maybe the films should be stored better? If anyone has any way of getting a message to the owner or Mr. Tarantino….

Did any of you go to Quentin Tarantino’s Grindhouse Film Festival ‘07 at the Beverly Cinema? That took place last March to May 1, 2007. if you did, then did you ask QT about the status of the King Hing theatre?

Went to several nights of the Grindhouse Fest, which was SO GREAT, but unfortunately I missed Quentin. I heard that he did show up 2 or 3 times, but it was a long festival, every night for almost two months.

I wish that I could’ve been there for the Grindhouse Fest, but i missed it. It did sound like it was great like you said, ScottS, but I couldn’t go. For some strange reason, I’ve ACTUALLY HEARD OF most of the movies in Quentin’s Grindhouse Fest. Like for example, I’ve heard of these movies from memories of L.A. Times ads, TV, etc.:

“Screams of a Winter Night(what I heard about this movie, although I don’t know if it’s actually a good or bad movie, is that the only famous person involved w/ this was a cameo by the young actor who played the hero in 1985’s "Fright Night”)"

“Wonder Women"
A very strange movie that I barely remember from L.A. area TV. I guess that "WW” is just another ripoff of the James Bond movies. I remember this having a very strange ending, also. And unless actress Lynda Carter was not really that big of a star back then or if you’re not a comic book fan, then you’d WONDER or be confused. For one thing, I wonder if DC Comics knew about the use of that movie title. I guess that doesn’t matter since “Wonder Women” is a very unknown movie, starring Nancy Kwan(also unknown except to we Chinese?).

It still looks vacant. I guess Quentin Tarantino let us down.

This theater is in danger of being demolished right now (12/2014). The owner is in negotiations with a developer to level this whole block to build yet another apartment tower with retail on the street level. This is the last remaining historic Chinese language theater in Los Angeles and along with the adjacent buildings (all built in the late 1800s) are a valuable part of the cities historic core and should be saved. Please add your voice to help save this historic property.

Still sitting there, doing nothing as of May 2015. I wait in my car by it all the time and wanted to know more about it, which led me here.

King Hing still standing as of Feb. 2017 per Google maps. You can glimpse the vertical marquee in the distance down N. Spring St (from Ord St.) in Polanski’s CHINATOWN (1974). Presumably the entire climax of the film was filmed on that block of N. Spring between Ord St. & W. Cesar Estrada Chavez Avenue. See accompanying screen shot from CHINATOWN in King Hing photos..