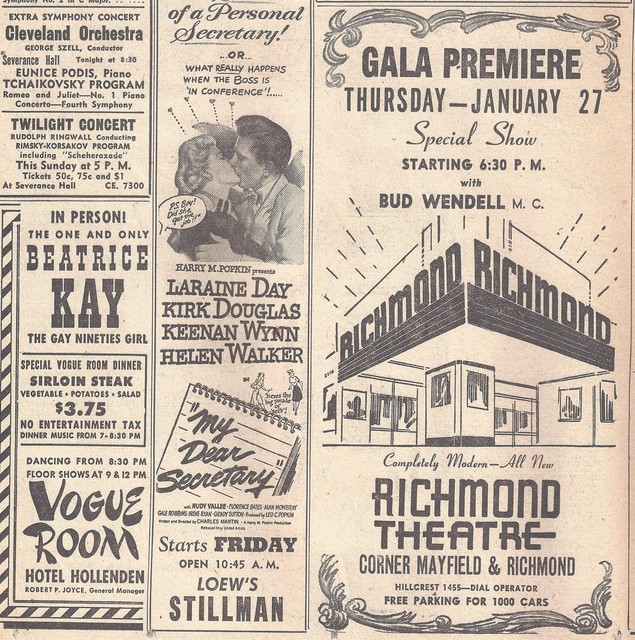 The Richmond Theatre opened in February 1949 as a single screen. All seating was located on a single sloping floor. It was triplexed in the 1980’s under Loews ownership. The theatre closed on December 1, 1991.

A DSW Shoe Warehouse store then occupied the building, with the marquee being used to identify the shoe store. It was demolished in early-2009.

The shoe store that occupies the Richmond Theater has closed. The building is now vacant.

As of this week, a fence has been erected around the perimeter of the property, and all storefronts have been cleared Bobcat-style. The auditorium has an open section of its west wall, obscured by plastic sheeting, and construction equipment is on site. It doesn’t, unfortunately, look like a renovation, and if it is, it’s one where the end result is a shell.

The demolition is now complete on this theatre. Two pictures are available if you mail to

Theater has been down for some months now — clearing was to create a parking lot and visibility from Mayfield Road for an Aldi’s grocery store erected at the rear of the property. Store opened in August/September 2009.

I only went to this theater one time. My dad took me here to see Freddy’s Dead: The Final Nightmare, in 1991 (I was about 9). I think it closed down not too long after.

It was a Designer Show Warehouse for years. Then in 2009 half of this plaza was torn down (including DSW) and became a parking lot for the Aldi’s grocery store they built in the back.

As a kid I went to the comic book shop Northcoast Nostalgia which was pretty much next door all the time (this is about 1994-1998). Since the building it was in was torn down as well, Northcoast moved its operations not very far at all; it is now in the plaza in the back adjacent to the Aldi’s.

The Google street view for this theater is on the wrong side of the street and too far East. This is the correct streetview: http://g.co/maps/j72ka (5104 Mayfield Rd, Lyndhurst, Ohio). The site is a parking lot.

nice until tripled i bet,just like my old Theatre NATIONAL HILLS.

Actually, as far as triplexing goes, this one was not insensitive; two small screening rooms were built in the back section of the main floor, left and right of the entranceway to what became the main center screen. These extended down about a third or half-way into the original auditorium.(see auditorium photo). But aside from that, the center theater very much resembled the the original auditorium; those plaster curls and the big screen were retained. (A similar triplexing was carried out in the original auditorium of the Lake in Euclid). The Richmond was a very large theater for a suburban house and probably would not have survived as long as it did without the triplexing.

This was one the theaters I went to frequently in the 1960s. “Goldfinger” played for many weeks there; I also remember seeing “Thunderball” and “Wait Until Dark” at the Richmond.

The Richmond Theatre was built in 1949. The February 14, 1951 issue of The Exhibitor ran this article about the theater’s second anniversary:

“Cleveland —Several hundred people braved the sub-zero temperature to participate in the triple anniversary celebration held in the Richmond, deluxe first subsequent run in the suburb of Lyndhurst, O.

“It being the second birthday anniversary of the theatre, this date was selected as most fitting to receive the much coveted Exhibitor award as one of the ‘most modern and well appointed of all theatres constructed in 1949.’ Presentation was made on the stage by Ernest Schwartz, president, Cleveland Motion Picture Exhibitors Association, to Bert Lefkowich, Community Circuit, son of one of the theatre owners. In accepting the trophy, Lefkowich expressed his appreciation, and paid tribute to Max Marmorstein, realtor, who made the project possible, and Joseph Weinberg, architect, responsible for the architectural and decorative design of the structure.

“The ceremonies also included presentation to Mayor Elmer T. Elbrecht of an engraved plaque from the businessmen to commemorate the suburb’s change of status from a village to that of a city. Speakers included ex-Congressman-at-large Stephen Young and Mrs. William McCabe, who presented a check in the amount of $480 to Ernest Schwartz, representing ‘The March of Dimes’ collections in the Richmond under her leadership.

“Carrying out the anniversary theme, the feature attraction was ‘Mr. Music,’ which called for a congratulatory telegram from Bing Crosby. Congressman Frances P. Bolton also wired her congratulations from Washington.

“Max Greenwald, manager, Richmond, made all arrangements for the celebration.”

The Loews Richmond Theaters final day of business was 12/1/1991 and had become a second-run discount theater not long after the expansion of the nearby Loews East at Richmond Mall from 2 to 8 screens a year earlier. The final movies shown at Loews Richmond were Ernest Scared Stupid, Terminator 2, and Freddy’s Dead.