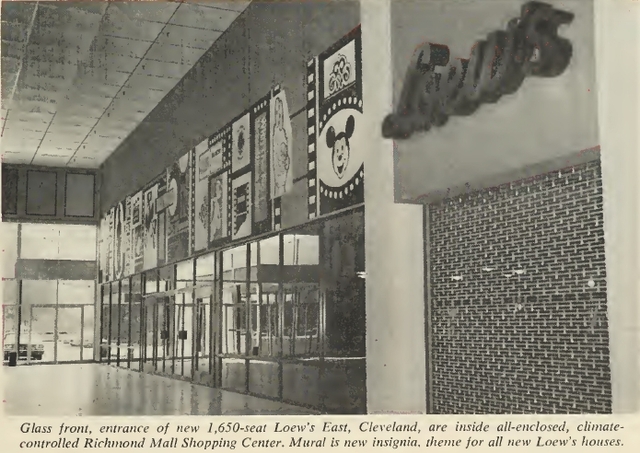 The Loew’s East opened in 1966 in the Richmond Mall in Richmond Heights, to the east of Cleveland, OH. It had 1,650 seats. The original single screen theatre was twinned on December 20, 1972, and was decorated with attractive Hollywood graphics on the walls. In the early-1980’s, a six-screen annex was built next door.

If he’s like alot of old theatre dawgs,he is probably on CT.

Here is a photo of the entrance to Loew’s East on the cover of the Modern Theatre section of Boxoffice, January 16, 1967. The description (on the following page) says that the Loew’s West in Cleveland was opened the same day as Loew’s East.

None of the Boxoffice links at Issuu are working tonight. I think the magazine might have removed its archive from the site.

When I first found the Boxoffice archive on Issuu, I didnt link to any of the articles I cited. This was because I didn’t know who had uploaded them, so I feared they might be removed at any time. But after I found that the publishers of Boxoffice had uploaded the archive there themselves I began linking, thinking they would probably remain available. It looks like I might have been wrong.

I hope it’s just a temporary glitch, but everything else at Issuu appears to be working fine, so it does seem likely that Boxoffice has changed its mind about making its archive available online. That would be too bad. It was a useful resource, and I certainly don’t have anything else to compare with it. Plus, Cinema Treasures will now have another goatload of dead links, a large percentage of which I put there.

That lavander color scheme (Thanks,I was never sure what it was) was standard stuff for Loew’s in the 60’s.

I worked there when I was 16/17 years old, 1969/1970. Worked as an usher, doorman, fill in cashier. I remember movies such as Easy Rider, Barberella, The Graduate. People lined up to the middle of the Mall on Fri/ Sat nights. Incredible!

Final day of business for the Loews East 8 was January 28, 1999. The final films shown were Patch Adams, Stepmom, Virus, In Dreams, The Faculty, Varsity Blues, A Civic Action, A Bugs Life, and At First Sight.