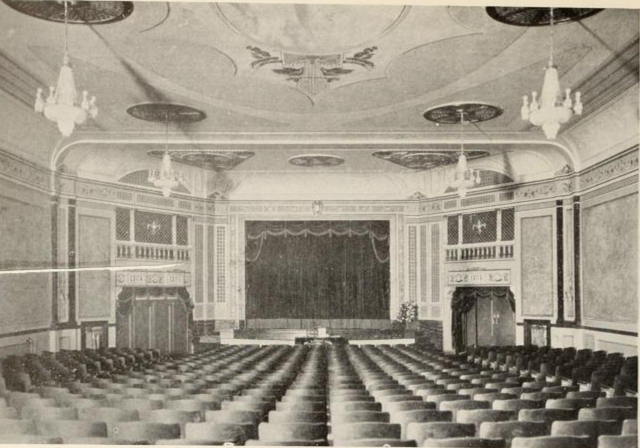 The Major Theatre was known under a few names during it’s life. In later years it was known as the Cinema Giglio and may also have been known as the Canal Cinema at some point, though not to be confused with the Canal Theatre further away on Canal Street. It is currently in the bustling part of Canal Street in the heart of Chinatown as Chinatown continues to eat up most of what is left of Little Italy.

Today, much of the exterior still exists of the Major Theater, including the marquee, although the interior has been converted to retail and flea market like space. Much of the ornamentation still existed in 2004. When first entering, you could easily tell you are in the lobby of an old theater, right down to some mirrors on the walls. Once passing into the main auditorium of the small theater, it still screams theater as much of the ceiling plasterwork and columns still exist. Perhaps much of the walls also still exist, although mostly covered by pegboard for the merchandise now in the space. In 2014 only the former lobby is in use as a store.

Does anyone know around when they stopped showing movies in this little theater?

This was still operating as the Canal Cinema in the summer of 1978.

Operating as Cinema Giglio in 1963.

Here’s a google street view of the Major Theater. It’s marquee still up:

Maybe the Major Theatre was not so major.Just kidding.

Dear Bway and CinemaTreasures readers, indeed this theatre had, or perhaps still has, a theatre pipe organ: Wurlitzer model B (2 manuals, 4 ranks) Opus 1786, was shipped to this theatre on November 17, 1927.

The online, searchable Wurlitzer Opus List compiled by Judd Walton and maintained by Peter Beames claims that the organ is still in the theatre, but the status is “NG” (not good), meaning that it may be missing parts, and/or water-damaged, and/or vandalized, and/or needs major restoration work to play again. (READ: probably not hopeless, but a lot of extra work for the restorer(s).)

However, no date or source is given for this information, so the organ might not still be there as of right now (Oct 2014). I’d love to be able to get in the theatre (with the owners' permission) and check it out if/when I’m in New York!

I’m not sure, but relatively few Wurlitzer B’s seem to be left in their original homes, although this WAS Wurlitzer’s most popular curved-console theatre pipe organ model (with 225 built).

Because of the tibia-centric (though great) styles of organ playing that developed with Jesse Crawford, George Wright, and others, a lot of theatre organ snobs (excuse me, enthusiasts) don’t like theatre organs that don’t have tibia clausa pipes; and the standard model B (of which this, apparently, was one?) did not come with a tibia.

However, Wurlitzer also was willing to customize their standard models, and quite a lot of the 225 B’s produced were actually “B Specials”, which could mean a variety of things.

In the case of the model B, “Special” often meant that the tibia was added as a fifth rank, making the organs 2/5s.

Again, the organ in the Major theatre is NOT listed as a “B SP” in the Opus List, but I think it could still be a nice sounding instrument, provided that the original installation was done in a satisfactory manner with good acoustics, and provided that the organists simply play in styles that don’t require the use of the tibia.

Does anybody have any recent photos inside this building?

Here is the listing for this organ and theatre on the NYC AGO (American Guild of Organists) website. The site also provides the organ’s specification (taken from literature, rather than the instrument itself). The site does not currently say whether or not the organ is still in the theatre: http://www.nycago.org/Organs/NYC/html/MajorTheatre.html

The Major Theatre isn’t as intact anymore as the original opening comments are since I wrote the intro back in 2004. The junk flea market type store in the theater had closed in the late 2000’s, and a Verizon Wireless store had opened in the lobby part of the space. Of course all the old mirrors, ceiling, etc that is described in the original intro are now either removed or covered over. The marquee is still out front, and Verizon uses it for it’s store sign.

The source of many of the ethnic Italian-language films shown here when it was the Cinema Giglio was the importer-distributor Casolaro-Giglio, on Lafayette Street.