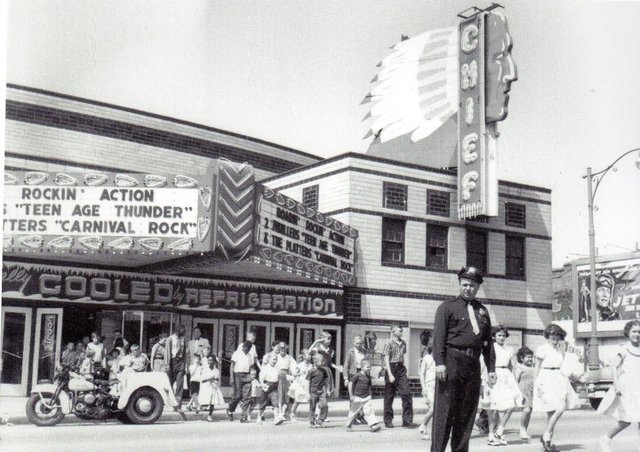 Opened on April 5, 1947 with Larry Parks in “The Jolson Story” & a Walt Disney cartoon “Funny Bunnies”. The Chief Theatre stood on the west side of the street in the middle of the 4600 block (between K and L Streets) on South 24th Street in Omaha. It’s marquee was the profile of an Indian Chief in a large head dress. I believe orange and maroon were the dominate colors of the facade and marquee, but I could be mistaken.

It had murals painted on the auditorium walls that shimmered and glowed when the lights were down, and depicted a water fall scene with Native-American figures, canoes, and campfires to the best of my recollection. In the 1960’s this theatre showed beach party pictures, cheaply-made horror films, and biker flicks.

Currently the site is a branch of the Wells Fargo Bank.

I like the pic…Would be great to have t-shirts made…lol….I first attended movies at the Chief about 1960. I saw all the Beach Party movies ( Annette Funichello n Frankie Avalon ) all the James Bond Movies,and many more. It was our regular entertainment. I think it was 35 cents admission ( under 12 y/o ) .for a double feature and a cartoon…Those were the best days.

our family live on 25th and L street. Johnny’s Cafe, the stockyards, the fire station, the junkyard (behind the fire station) is where we grew up. Our step father used to own a bar right on the corner of 24th & L. I remember my brother and I used to climb up some stairs and ‘hang out’ on the roof of the theater……man this is going back for me…..

I grew up in that same area. Those junk yards were my playgrounds. …Slim Jims would be that bar on the corner of 24th & L… I had a paper route with the fire station, Polish home, Johnny Cafe etc. I actually worked at Johnnys cafe once….Many memories of the Chief theater tho…..

Bob,,,that link does not exist….I dont think they did the black light murals till mid 50’s…Are you sure that article was in a 1949 mag ?

Ok, I got the link this time….I remember they did a make over mid 60’s…Maybe they just retouched the paintings then. I remember the murals looked new then. I was 11 or 12 y/o then.

Black light murals had been around for about a decade before the Chief Theatre was built. The first use of black light decoration in a theater that I know of was at the Academy Theatre in Inglewood, California, designed by architect S. Charles Lee. It opened on November 7, 1939.

On December 17 that year, the Tower Theatre in Fresno, California, was opened. It, too, was designed by Lee for the Fox West Coast circuit, and featured black light murals painted by Tom and Frank Bouman of the A. B. Heinsbergen Company. The Tower even had fibers that would fluoresce under ultraviolet light woven into the auditorium carpets.

I’m not sure if the black light murals of the Academy, which now houses a church, have survived, but those in the Tower are intact.

I added a color picture from the 1940s showing the marquee and a streetcar.