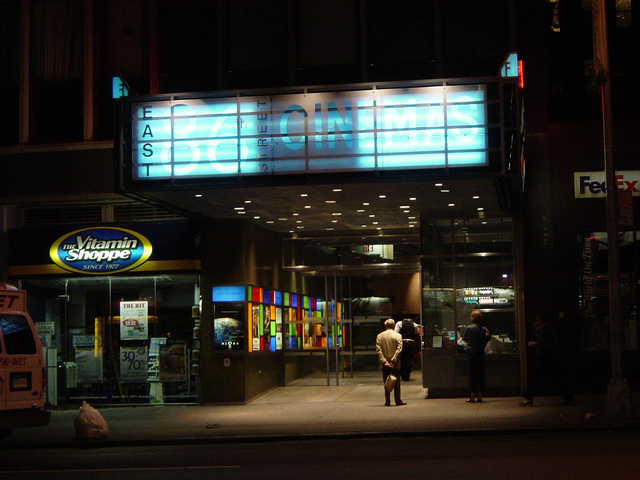 Built in 1904, by 1914 it was operating as a 1,000-seat movie theatre named Yorkville Casino Theatre, a name it carried until at least 1931. By 1932 the seating capacity had been reduced to 600 and it had closed by 1933. By 1935 it had reopened as the 86th Street Casino Theatre, still with 600-seats. It was a neighborhood movie theatre in the predominately German speaking Yorkville section of Manhattan where German language imports had their U.S. premieres before moving on to the other German language houses like the Wagner Theatre in Ridgewood and, if I remember correctly, the Irvington Theatre in Irvington, New Jersey and other cities. This was in the very late-1940’s til the mid-1960’s.

As the ethnicity of Yorkville changed and the popularity of the Upper East Side increased, the theatre was closed in 1965 and re-modeled into the 86th Street East Cinema. By 1968, it was daydating with Loew’s Capitol Theatre with movies such as “In the Heat of the Night” and ran for a good ten years as a United Artists showcase/Red Carpet theatre under the guise of Town & Country Theatres as a single screen. Movies shown at that time included “Around the World in Eighty Days” (re-issue), “The Hospital”, “The Scalphunters” and Jame Bond movies such as “On He Majesty’s Secret Service”. The seating capacity as a single screen was around 600-800 seats, in three wide aisles. After UA slowed down, and tended to send its movies to say the UA East Theatre, the 86th Street East Cinema was also a Universal and Warner Bros. showcase, with movies such as “Freebie and the Bean” and “The Great Waldo Pepper”.

It was gutted and converted into a 4-screen theatre on May 21, 1999, now having a great post-industrial feel. It was operated by City Cinemas who closed it on May 10, 2019.

you have always been most helpful in the past so I have a good one for you this time. a theater of one sort or another has occupied this location for over a hundred years. now prior to the 86 St. East 4-Plex opening this location was home to the 86 St. East a single house for decades. now was the single screen 86 St. East which was a decent sized building completely demolished or was it simply gutted and the current 4-plex built within said gutted skeletal structure?

I remember when this theatre was just one screen in the mid seventies.Great theatre.I saw a number of big movies there when I was growing up in the city,including Moonraker,Poltergiest,Jaws3-D, and Scarface.

Bigjoe59… Sorry for the delayed response, but I don’t have notifications set up for this cinema. The answer to your question is in the description at the top of the page. The single screener was divided, first in two, and then, later, into its current quartet format. All within the same structure original structure. Had the original building been torn down, with a new edifice erected in its place – as with the old Loew’s State on Broadway – then we’d have two separate listings on CT (again, see the seperate entries for the Loew’s State and the replacement Loew’s State Theatre 4 herein.)

The theater’s website does not seem to work today for this one but current movies appear via google.

Closed as of last week. Perhaps it was operating on a 20-year lease. https://patch.com/new-york/upper-east-side-nyc/city-cinemas-theater-closes-suddenly-upper-east-side

A real shame…one of my go to’s growing up and when I lived in the neighbourhood again in the late 80’s They’ll squeeze in another skyscraper but the UES dramatically underscreened – there were a total of 9 single and twins when I was growing up there in the 70s – TransLux 85th, RKO Twin, Loews Twin, UA East, 86th St East and Juliets