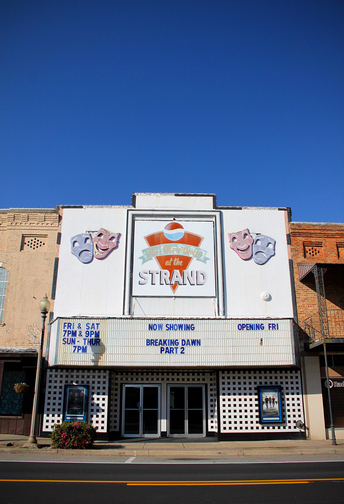 The 792-seat Strand Theatre was opened on July 5, 1923. It was rebuilt/remodeled on January 8, 1937 when the seating capacity was increased to 900. It was still in use as a first run, single-screen movie theatre until it closed on November 9, 2013.

FYI: your search engine is including theatres from Alberta, Canada when searching for Alabama Martin McCaffery

In 1970 the Strand was part of the Fred McLendon theater circuit, along with the Palms Drive-In in Atmore.

A very cool theater. A friend of mine lived down the street from it for a few years (unfortunately he moved this year), and every year for his birthday he would rent the theater for the day and we would watch dvd projections of classic movies. I was amazed that he could do that on a Saturday for just a couple hundred bucks or so. We would take a break from about 5:30 to 11:30 or so, so that they could have regular evening showings of whatever new feature they were showing, and then we would watch another dvd-projected movie at midnight. The management there is super-cool, we sure had some great times watching movies in this wonderful old historic theater.

The Strand Theater in Atmore, Alabama, until its' recent closing in November of 2013, was the longest continuously running Theater in the State of Alabama. It has a fascinating past, and was home to many people seeking motion picture entertainment in Atmore, Alabama for almost 100 years. In earlier years it was also used as an Auditorium for various events in Atmore, including Beauty Contests back in the 1930’s! The building is in good structural condition, but is in need of restoration. It definitely meets the criteria for a Historical Designation, and a good candidate for the many grants available for such Historic Theaters throughout the United States.

I had one of my Birthday Parties from the 1950’s extended on to the Strand after the cake and presents were made at my home in Atmore. Everyone was anxious “to get to the movies!” The first picture I remember seeing at the Strand was Cecil B. DeMille’s 1956 “The Ten Commandments”. I know it had to have had a run of two weeks or longer at the time, with 2 showings a day. When this film was shown in Atmore, the first few days at the Theater were packed, with lines all the way down Main Street!

I remember seeing “Some Like It Hot”, “A Summer Place” and “The Graduate” at the Strand when they were initially released to the public. Saturdays were always popular for Science Fiction films and serials. When any film with Paul Birch (actor born in Atmore) in it was shown, the Theater was a sell out as news always spread around town about any of his films being shown at the Strand! Paul Birch was in “The Queen of Outer Space” with Zsa Zsa Gabor, (now a cult classic), and many other films including “The Man Who Shot Liberty Valance”.

In those early days, circular stained glass lighting panels were under the balcony, and gave the dimly lit feeling associated with any Theater. Dark red velvet curtains hung between the lobby and the Theater itself. The Strand was indeed quite grand at the time, and hopefully can be restored to that grandness from the past, and at the same time be a functional Theater for Atmore as it has done for almost the entire previous century.

The Strand in Atmore, being similar to other small town Theaters at the time, served as a stage for fashion shows, beauty pageants, dances, and various other community events.

Stars of the “Grand Ole Opry” and “Hollywood” made live appearances at the Strand according to what I remember people talking about from years past. During the 1930’s, Mae West’s movies were considered so risque, people would buy their tickets quickly and get inside the Theater to avoid anyone seeing them enter the Theater to see a Mae West movie. My, have times changed!

The Strand was the community’s prime source of reliable news from the battle-front during World War II with their News of the Day. Travelogues of places to see around the United States and the World were often shown with the cartoon, News of the Day and the Feature Film.

With a large seating capacity, including main floor and balcony, the Strand Theater in Atmore, Alabama was the place to be on a Saturday afternoon for generations of children to see the weekly serials, Westerns and Science Fiction Films especially during the 1940’s and 1950’s. Sunday, Monday and Tuesday were generally reserved for major film releases, and brochures were provided in the lobby for the weekly schedules. A cartoon was shown with each Feature film, and these were also mentioned in the weekly Strand show brochure.

Efforts are already afoot by local community minded citizens to begin a “Save the Strand” campaign from what I have heard and read in the local paper, The Atmore Advance and from friends living in Atmore.

Let’s all wish them the best of luck in their efforts to save this longest running Theater in the State of Alabama!

There was a Strand Theatre operating in Atmore at least as early as 1924, when the April 26 issue of Exhibitors Herald published a capsule movie review by its manager, W.W. Lowery, Jr..

If the plans of the Martin Theatre company were carried out, the Strand was rebuilt in 1936, announced in this item in the September 18 issue of The Film Daily:

“Atmore, Ala. — Martin Theaters will start construction about Oct. 1 on a new house here seating 600 and at a cost of approximately $25,000. The house will be built on the site of the Strand.”

@kevin mcintyre i can’t find any evidence of a drive-in in atmore!

dansdriveintheater: kencmcintyre is no longer active on this site, but I found this 2008 article from The Atmore Advance saying that the Palms Drive-In was just across the state line in Florida. Cinema Treasures has it listed in Walnut Hill.

Right After The Remodeling On January 8, 1937 (Reopened On That Day With George Brent In “More Than A Secretary” For Only One Single Day), The Capacity Increased To 900. The Projection Booth Is Fireproof And The Strand Contains 2 Entrances For White And Color.