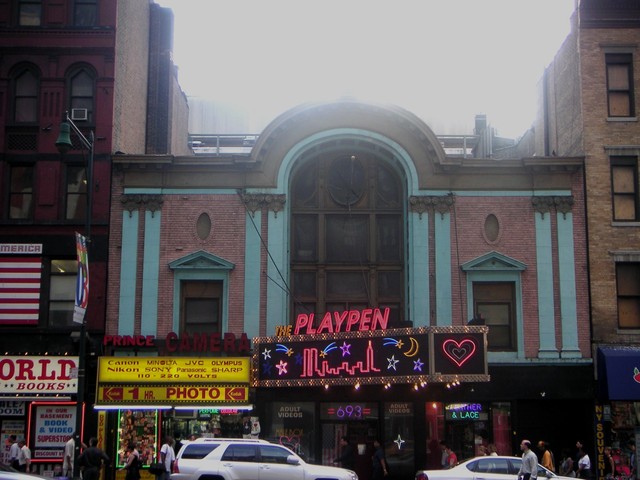 The Ideal Theatre was opened in 1915 and was operated by the New York based Consolidated Amusement Company. It had many owners and name changes over the years. In the 1960’s it was owned by Chelly Wilson, who owned a handful of similar theatres in the area. According to Sleazoid Express, this place was famous for the “Olga” movies.

The Playpen Theatre was demolished in December 2007.

photo from 2005ish which ive played around with using shift tilt thing on photoshop, a whole new look at the Playpen
http://www.flickr.com/photos/woody1969/5076785224/

Before it was the Playpen it was the Adonis (a different Adonis from the more famous one of the same name farther up 8th Avenue) and before it was the Adonis it was, of course, the Cameo, and I’m surprised that this theater doesn’t have a separate listing under that name because it was the “Cameo” for decades. Bill Landis (or, I should say, the late Bill Landis because he recently passed away) and his wife Michelle Clifford in their essential book on Deuce movie theaters, “Sleazoid Express,” devote a whole chapter to the Cameo and its owner, the infamous Chelly Wilson, the doyenne of Times Square smut palaces. Ms. Wilson deserves some sort of immortalization on the Deuce Walk of Infamy and if you can find Landis' excellent article on her that used to be posted on the Alpha Blue site, it is essential (and truly jawdropping) reading.

If I recall the book correctly, the Cameo is where the notorious roughie “Olga” movies played, but, more importantly, the Cameo played an important part in the history of Times Square pornography when in May of 1970 the film, “Sexual Freedom in Denmark,” premiered there. It was the first X-rated film to truly show “penetration” shots as compared to tamer less graphic adult flicks like “I am Curious (Yellow).” “Sexual Freedom in Denmark” was part of the wave of instructional adult films that were supposed to be documentaries or “how to” flicks, which is how they got away with the “redeeming social value” obscenity issue. Nowadays, they are known as “white coaters” because they usually had scenes of a sham doctor lecturing about the importance of sexual openness interspersed with the action shots. “Screw” magazine gave it the highest rating it ever bestowed on an X-rated film up to that point, and because of its explicitness it opened the floodgates of truly hardcore pornography that eventually overwhelmed Times Square.

“Sexual Freedom” played the Cameo for months. I saw the next film there in the fall of 1970 when I was a college freshman, “The Postgraduate Course in Sexual Love.” It was the first “adults only” film I ever saw. There was also a trailer for the next feature, “The Kama Sutra,” that, if my memory serves me correctly, featured an unknown (at that time) actor named John Holmes. I remember the theatre well: at that time it was still a comfortable, well-appointed, well-heated little theatre with a respectful, quiet audience. Years later (actually a decade later) I went back to the Cameo out of a combination of curiosity and nostalgia and it was a pure hellhole and indicative of how porn just totally trashed those Times Square theatres. The Cameo had been stripped of all of its prior interior comforts (carpeting, an ornamental urn in a niche as you entered the theatre), reeked of urine, and had tranny hookers patrolling the aisles for quickie tricks. It undoubtedly continued its inexorable decline down the sewer as it finally morphed into the Playpen and total decrepitude. But back then in the long ago time of 1970 it was still a lovely little theatre unkowingly about to succumb to venereal rot.

I am working on a project to document the history of adult theatres in the US. If anyone has any person memories of the Playpen/ Adonis they would be willing to share, please contact me at mjprigge at uwm dot edu

Another picture of the interior, when new, is here:

I went to the New Adonis (for research). I’m glad I got the chance to see the old theatre before it was closed. The balcony was still open.

New old photos for the Ideal and Squire theaters, both former names for the Playpen, posted in Gallery. The Squire photo is from 1917 and of excellent quality, from the New York Historical Society. The Ideal image is from the NYC Tax Photos, 1940.

I believe the Ideal Theater opened in 1915.