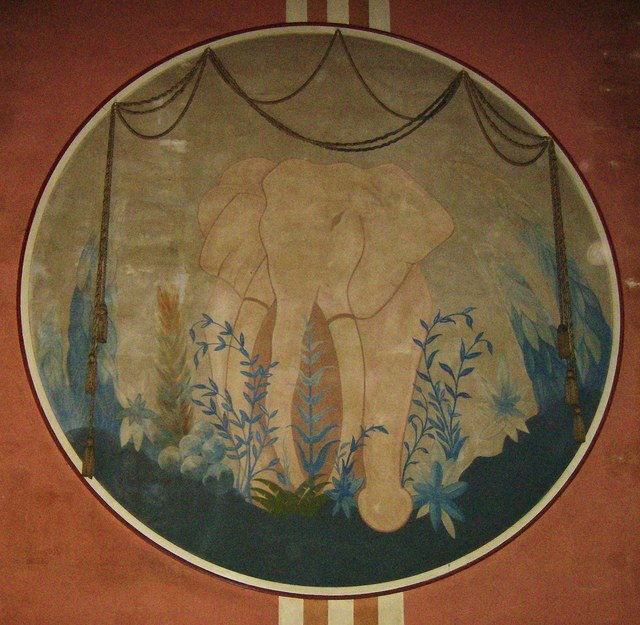 The Uptown Theatre was opened in 1936. This building appears to be completely vacant, but well cared-for. The design is a simple late Art Deco style facade with very minimal decoration at the top. The current marquee does not look right. It’s much too thin, and may have been a fixup. There’s only space for the word Uptown on the panels. The exterior ticket booth is very nice.

What a gorgeous theatre! The blue trim really makes the details of the building pop. Hope they manage to locate windows on the side or something to keep the facade intact if they convert the building into apartments.

We made a short video of the theatre and its surroundings:

Sedalia looks very empty. In fairness, it was a Sunday and there’s a lot of rebuilding going on, so downtown was unusually quiet in November. Take your point about Google and the street number Chuck, thanks.

The building has been donated to a non profit. It has been awarded a grant for an interior design study by the National Register of Historic Places. Once completed, a fund raising campaign will ensue in order to restore the Uptown as a venue for concerts, plays, classic or non-mainstream cinema, etcetera.

The owner at the time the theatre opened in 1936 was J.T. Ghosen.

J. T. Ghosen operated an earlier theater in Sedalia called the Star, at 116 W.Second Street. It suffered a fire in 1930, as reported in the October 22 edition of The Sedalia Democrat. The article said that Ghosen operated “…several other small theatres through Central Missouri.” The Star was repaired and reopened, as it was mentioned again in a September 1, 1932, Democrat article about an event at Ghosen’s New Royal Theatre in Versailles, Missouri.

The Uptown is currently being renovated to its 1936 glory! Please visit Uptown Theatre Sedalia on Facebook to learn more! Thanks! -Marty Lange, Uptown Theatre Project Coordinator

The 1914-1915 American Motion Picture Directory lists 225 Ohio Street as the address of the Electric Theatre. A photo of the rear of the building at CinemaTour shows old red brick painted over, and several windows that have been sealed up on both the first and second floors, so the building itself is quite old.

It is probably the same building the Electric occupied, though the Electric was most likely a storefront conversion occupying only part of the ground floor, and the building was probably gutted and rebuilt inside to house the Uptown, and the Streamline Modern front put on.

The Electric is never listed in the FDY, and is mentioned in the trade journals only in the 1910s, so there was probably a long gap of more than a decade between the closing of the Electric and the rebuilding of the structure for the Uptown.