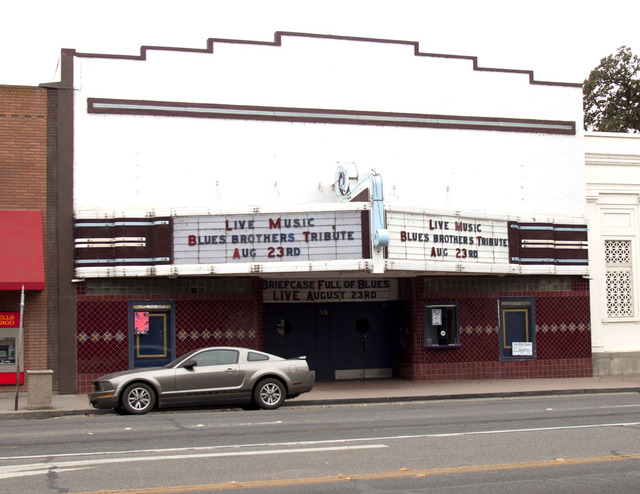 The Colusa Theatre opened on May 15, 1931 with Jack Oakie in “The Dude Ranch”. It was located in premises which had previously been the Sargent Mercantile Building. It was severly damaged in a fire on October 1946 and was renovated in August 1947. It continued until closure came in 1995. Renovation work began in 1996 and it reopened soon after.

This rather boxy facade has a very nice marquee which features interesting neon on the bottom. Curiously, it displays no name on the outside. It appears that there were signs at either end. The entire street level is faced with fancy tiles. The Colusa Theatre was closed March 6, 2017.

not Boo Radley’s house- a couple of scenes outside the courthouse were filmed at the Colusa Courthouse. They actually used the steps at the back entrance to the courthouse addition rather than the front of the courthouse which has no steps. The scenes include crowds rushing to the courthouse for the trial, and the kids hanging out on the steps before going in. In the background you can see a stone building which at the time was the Carnegie Library- for the film it was given an awning and made into a drug store. Interestingly, this same building was used as the police station in tick…tick…tick… I don’t know whether it was still the library at the time (the film came out in 1970) but it is the police station now- so maybe a case of life imitating art! There are also a couple of orange trees visible in the ‘To Kill a Mockingbird’ scenes that are still there today.

In fact, I just went to the Universal Studios link Joe posted and it clearly says that ‘the exteriors were all shot on the Universal backlot.’ But one of the pictures it shows is actually shot in Colusa- you can see the stone drugstore and orange trees I mentioned in the background!

This theater is in serious danger of closing: View link

The Colusa is having a “Digital or Die” campaign on Kickstarter. Without an upgrade to digital projection the Colusa could close.Donate Today! http://www.kickstarter.com/projects/174769538/digital-projector-for-the-colusa-theatre?ref=category

I contributed and will put it on the Jay House Facebook page. If you need a place to put someone up for a live fundraiser or an item for an auction, I’ll be happy to donate nights at Jay House vacation rental. -Connie

The Colusa Theatre closed March 6th, 2017, and appears to be for sale. Website below. 1 exterior photo and 1 auditorium photo added credit Katherine Mixie Kubicek‎. Thanks For The Memories & For Sale Or Lease on the marquee.

Oh — and there used to be a blade sign down the front but it was knocked out in a storm a LOOOONG time ago (60’s? sooner?)