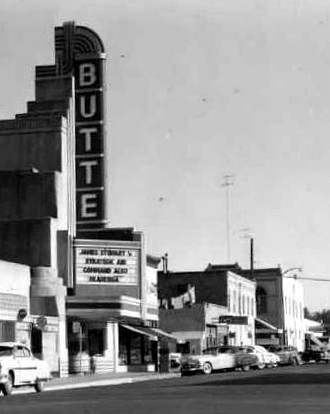 The Butte Theatre was opened on June 18, 1938 with Deanna Durbin in “Mad About Music”. It was closed on September 3, 1973. It became a church. The Streamline Moderne style façade and entrance were demolished, but the unusually shaped auditorium survives.

There’s the link to the first of 4 pictures. You can get to the rest quite easily from there. Sorry for the poor light, it was a little late in the day.

Boxoffice Magazine of September 3, 1973, said that the Butte Theatre was scheduled to be shuttered that day. The last operator was United Artists Theatres.

Google Maps street view shows that the Butte has lost its marquee and distinctive art moderne tower. The terrazzo of the former ticket vestibule appears to be partly intact, but the vestibule’s roof is gone and the entrance doors are sealed up. The auditorium is still standing.

From Boxoffice Magazine, February 12, 1938: “…George Mann and Morgan Walsh…have acquired a corner lot in Gridley, Cal, and will proceed immediately to construct a Class A theatre on the site.” Projected cost was $100,000, and seating was to be “about 800.”

Mann and Walsh were the operators of the Redwood Theatres Circuit, which was very active in the small towns of the Sacramento Valley during this era, so it seems quite possible that the unnamed theater to which the article refers was the Butte. It is on a corner lot.

But then there’s this item from the June 4, 1938 issue of Boxoffice: “Plans for rebuilding the Gridley Theatre, Gridley, are being drawn up, says owner Fred Naify. The house was destroyed by fire on May 15, with an estimated loss of $55,000.”

Whether it was the Redwood Theatres project, or Naify’s rebuilt theatre, renamed, the Butte probably dates from late 1938 or early 1939.

OK, the August 5, 1944, issue of Boxoffice gives another clue to the Butte’s origin. It noted that the Butte and three other Sacramento Valley theaters had been leased by T&D Jr. Enterprises from the heirs of the late Morgan Walsh. That indicates that it was the Mann/Walsh project of 1938 which became the Butte Theatre. Interestingly enough, T&D Jr. Enterprises had been taken over by Fred Naify, former owner of the Gridley Theatre, in 1947.

The $75,000 Butte Theatre opened to the public on June 18th, 1938, after an invitation-only preview on the night of the 17th. The owners were George M. Mann and Morgan Walsh. Mad About Music starring Deanna Durbin was the first film shown. Source: The Gridley Herald, June 17, 1938.

When I was trying to find out more about this theater in 2006, it was being used for church services, but the foyer and marquee had been condemned and torn down.

According to the google street view the marquee and tower have in fact been removed. The terazzo floor is still visible.

Maybe this one will come back? Check it out here and here.

The Butte Theatre Opened Its Doors On June 18, 1938 With Deanna Durbin In “Mad About Music” Along With An Unknown Amount Of Short Subjects, With The Building Being An Estimated Cost Of $75,000.