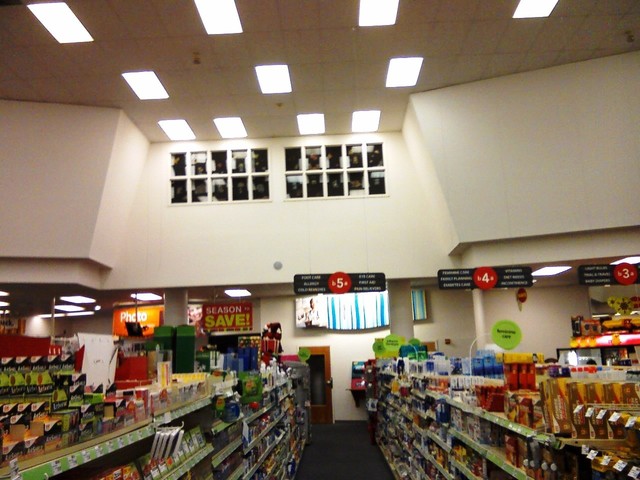 Opened as a 1,000-seat single screen movie theater on December 25, 1946 with Errol Flynn & Eleanor Parker in “Never Say Goodbye”. It was operated jointly by K-B Theatres and Warner Bor. Circuit Management Corp. On December 6, 1979, the MacArthur Theater held the world premiere of “Star Trek:The Motion Picture”. It was triplexed in 1982 (architects Goenner & Woodhouse), and closed in 1997.

Drugstore chain CVS took over the lease of the building that the same year and the once proud interior of the MacArthur Theater became a place to buy discount band-aids. Sadly, many of DC’s classic movie theaters have also been acquired by CVS.

The world premiere of “Star Trek: The Motion Picture” was held here in December 1979, but it was on Thursday December 6, 1979 at 7:00PM – one day before the film’s scheduled wide release date (December 7).

Speaking of “Star Trek: The Motion Picture,” I found this never before seen clip on youtube taken on premier night at the MacArthur. The image quality is excellent and shows the theater and its marquee and some quick interviews with some of the stars. From the sounds of the screaming crowd, there must’ve been hundreds outside, if not more. Grace Lee Whitney and Persis Khambatta look so beautiful. Its sad most of them are all gone now. Too bad, no interior shots of the interior.

And, to finally settle the 70mm debate, there’s no mention of it on the marquee. So its just plain old 35mm eprad stereo.

Can you believe its been almost 20 years since it stopped showing movies?

Liked this theater but was only there 2ce. JodarMovieFan, looking at that video, no room for marquee to say 70mm.

I can’t believe its been over 20 years since this place closed. 27 years since I’ve seen a movie inside. And its been 14 years since I’ve driven by the place and actually went in. I’m sure the CVS is the same inside as it was when I was there in 2004.

In reviewing my posts, I can’t believe I forgot to mention I saw Amadeus here in 1984 in 70mm. At that age, I had virtually no interest in Merchant Ivory-type period movies up to then, but I recall the commercials/trailer seemed to convey it to be almost unconventional. In fact, I believe MTV had commercials with the minimal frame cuts to appeal to that audience.

Upon viewing, one can say the movie isn’t Merchant Ivory-esque but a thoroughly enjoyable film and cast. In particular, was Tom Hulce cast as Amadeus and that cackle he was able to pull off that the real Amadeus supposedly had and a dirty sense of humor. This played quite well opposite F. Murray Abraham’s Salieri. I believe I saw it 2x before it went. The musical scenes were rapid cut but still audibly engaging given the sound format and McA’s auditorium acoustics. As its eventual Academy Award wins prove, I’m not the only one who thinks this way. :)

If memory serves me correctly, there was an extended or director’s cut that was longer than the original. It released only in 35mm so I avoided it.

The MacArthur run of “Amadeus,” just for the sake of clarity, was later on in that film’s (long) release. DC first run was at K-B Cinema. See “Amadeus”: The 70mm Engagements article.

This article on “Star Trek: The Motion Picture” should put to rest any questions about whether or not the movie was shown here in 70mm.

Was it named after General Macarthur?

Here’s the link to a new article on roadshow and large format presentations in Washington, DC, which includes numerous mentions of the MacArthur.

The piece is a work in progress, so please don’t hesitate to offer up any useful feedback.

A job routed me past this venue a few times. The exterior looks the same although I’m reading this CVS has consulting rooms. Not having gone inside but recalling how the store takes up the venue’s previous lobby area, I’m thinking they probably expanded the place to create the consultation rooms. They could easily have carved up #3, which was probably the smaller of the triplexed screens and is closer to the road.

Also, the next door Safeway has been closed, which is not surprising. It would have been closed after my last post.