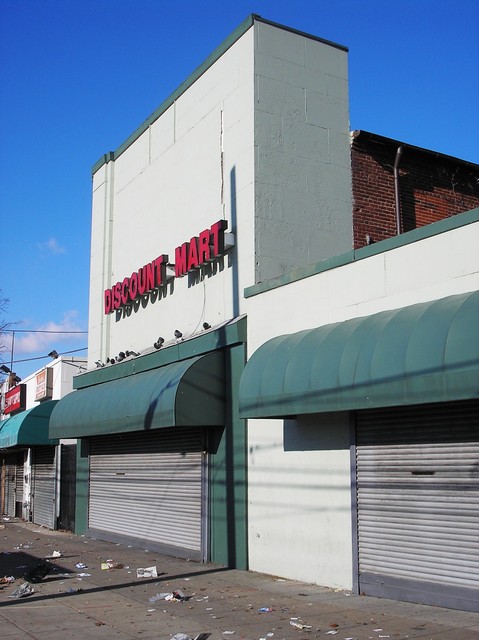 The Naylor Theatre opened on November 1, 1945 with John Garfield in “Pride of the Marines” and “The Palestine Problem”. It was operated by K-B Theatres, and is located in the Anacostia section of the District of Columbia. Designed by architect John J. Zink, the theatre featured a large community room above the foyer, which was available for community use with no fees being charged. There was also a 24-seat nursery and a 33-seat congressional room for private parties to view the film. Both these rooms were located on each side of the projection booth and had plate-glass fronts. There were 955 seats on the main orchestra level.

The theater had ran successfully until 1970, when it was closed. It is now used for retail.

The NAYLOR enjoyed a few good semi-exclusive runs during the early 1960’s, including Walt Disney’s MARY POPPINS. It was located in the most upscale section of SE Washington, DC. But the aftermath of the Martin Luther King riots and looting, combined with the unchecked decades-long crime spree which was pervasive in SE Washington; and cokhhead mayor Marian Berry [D] with his mal-administration, these took out ALL the theaters in SE including the Highland, Anacostia, Coral, Congress, Penn, Avenue Grand, Senator, and more. Unchecked crime isn’t good for movie theaters. The Senator bravely reopened as a Black enterprise for awhile until high crime and arson killed it. The Burn Baby Burn mentality of the era heaped praise not arrests on criminals. Black enterprise? Who cares? Burn it anyway!

Here and here are photos from February 2008 of the former Naylor Theatre.

The riots were miles from the Alabama-Naylor neighborhood. Barry was years away from being mayor in 1970 and the Hillcrest area has continued to be middle class and a sought after place to live. It’s the one area of E of the river that has retained some white population.

I remember seeing MARY POPPINS here the day it opened. Movies always opened on Wednesdays back then and my mom kept me out of school (4 o'clock matinee!) to avoid the weekend crowds. You walked down a long hallway as the theatre was behind the street. They had a nursery for toddlers while their parents watched the movie. And beautiful swag curtains across the screen. We used to go to the Coral (where I saw A HARD DAY’S NIGHT & PSYCHO & THE CHILDREN’S HOUR) and the Hillcrest (HOW TO SUCCEED IN BUSINESS… but this wasn’t a palace like the others!). How pathetic that these architectural marvels are all gone. And what does it say about our culture. Or lack thereof! There was a huge Sears across the street from the Naylor.

The Sears closed and subsequently was demolished and replaced by a Safeway in the 90s.

Going to the Naylor Theatre was a regular Saturday morning ritual for me in about 1955-1956. I lived nearby in the 2900 block of Denver Street (also attended nearby Stanton Elementary). In the morning it was a few hours of watching cartoons and whatever on television, and then in the late morning or early afternoon a movie or two (double features were common back then) at the Naylor. The movies were kid-friendly, and if I recall correctly, largely of the sci-fi or B-movie genre. And cheap.

Reading the blogs about the old movie theatres in Washington brings back poignant memories. I lived in southeast Washington as a child (c. 1946-1953), briefly attended Stanton elementary school, and frequented many of the theatres mentioned, most especially the old Naylor on Alabama Ave.

It was at the Naylor that I first saw the old Batman serials (re-runs even then). Only years later did I re-see them as a student at Harvard in the Brattle Cinema off Harvard Sq. The “camp” revival of Batman at the Brattle was to spur the TV series a few years later.

The Cliffie I took to the Brattle was also amused, but not so much as I. You see, she never harbored the hero-worship I had had for Batman and Robin. To see them years later in their cheap dimestore costumes, combating the Yellow Peril (the original was, of course, produced during WWII) was so overwhelmingly hillarious that I fear I lost my cool (de rigeur in the mid-60s as it is now) and guffawed unfashionably throughout the presentation. Well, scratch one ex-Miss Porter’s snot, but so what? The Naylor and the caped crusaders were far more memeorable.

I only worked the Naylor once, as a relief projectionist, in the early 70’s. It had an extremely high quality booth with Super Simplex XL projectors, magnetic sound heads, and a selsyn interlock for running dual reel 3D films.