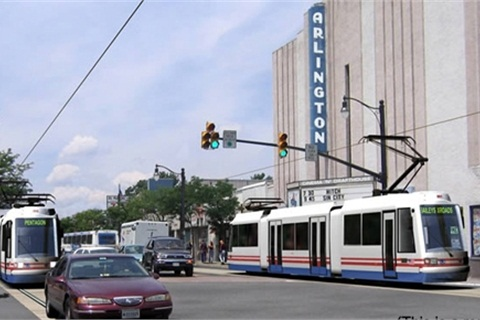 The Arlington Entertainment Center was opened by Neigborhood Theatres on August 15, 1940 with Cary Grant in “My Favourite Wife”. Designed by Richmond, VA architect Fred A. Bishop, it had a capacity for 616 seats. It featured a large 24 lane bowling alley on the second & third floors. It was later renamed Arlington Theater. The last operating movie palace in Arlington, in 1985 the theater was converted to a dine-in movie theater, serving food and beer with every screening.

The building is of note because it once housed the headquarters of The American Nazi Party.

The Arlington Theatre is located at 2901 Columbia Pike and it seated 616 people.

This building opened in August 1940 as the Arlington Recreation Center (whites-only), including a bowling alley on the upper floors and a pharmacy on the corner. Fred Bishop, who also designed Byrd Theatre in Richmond, was the architect. The opening night film was “My Favorite Wife,” starring Cary Grant and Irene Dunne. It was operated until 1975 by Richmond-based Neighborhood Theatres Inc. The theater desegregated in 1963 amidst picketing and lawsuits. The theater was converted to Arlington Cinema N' Drafthouse in 1985 and still serves up movies and food. The bowling alleys are now a tae kwon do school and artists' studios.

Glad that the Nazi’s are gone

The statement that this building was once the headquarters of the American Nazi Party is incorrect. Their first headquarters was located at 6045 Wilson Boulevard across from the Dominion Hills Shopping Center (the house has been razed.) The second location for the party was at 2507 North Franklin Road in what is the now the Java Shack.

The last surviving, operating theater of the Northern Virginia Neighborhood Theaters. Now a Pub and Cinema. This was the theater in which I learned to operate 35mm projectors. Simplex E-7’s with Magnarc Carbon Arc lamphouses, which most of their theaters used. It didn’t seem like such a big theater when I worked there, but theaters seem lots smaller now. There is also plenty of office space attached to this building. The American Nazi Party headquarters was once in one of the connecting shops.

December ‘99 update: Saw a movie at the Arlington. Can’t say I like the Cinema Cafe concept as a viewing experience, but it looked alive and healthy. Focus could use some work.

MPEWDC: Originally opened as the Arlington Recreation Center and had 24 lanes of bowling on the second and third floors.

Learned to operate projectors at the Arlingtonâ€¦ As stated E-7s & Peerless Magnarcs.. Worked next door from 1976 â€" 1981.. Donâ€™t believe the Nazis were ever in the building, they were always causing trouble in North Arlington (Wilson Blvd area)the theatre is in South Arlington.

Here and here are March 2008 photos of the Arlington Theatre. The owners are expending their operation and will soon be opening another Cinema & Drafthouse on the site of the former Wheaton Cinema Seven .

Went to see The Town there last week. First time at a restaurant/theater…was a lot of fun! Food was a bit pricy, but food is never cheap at the movies. $5.50 to get in! Good drinks to!

Love this place! Just went to see “Social Network” there.