At the Grove Theatre Productions (Official) 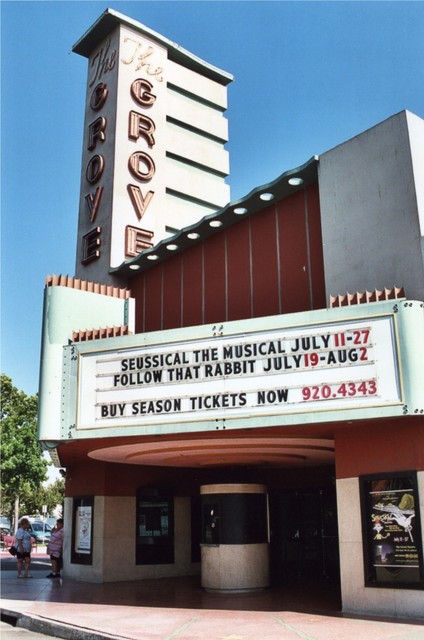 Located in Old Town Upland, the 831-seat Grove Theatre and attached shops were built in 1947 for the Western Amusement Company. The facade is dominated by a pylon-like tower on the left-hand side, which has the theatre named mounted vertically on three sides. The rather plain auditorium had all seating on a single floor, and the Grove Theatre was equipped with air-conditioning.

Since 1990 it has been operated by Sherry Kinison who bought and renovated the theater. Sherry is the producer of the Grove’s live theater which stages family-oriented plays and operates a school that give instruction in all aspects of the performing arts to youth and adults.

The Inland Valley Daily Bulletin notes that Sherry along with her husband Bill helped manage the career of Bill’s brother, the late comedian Sam Kinison. Bill keeps busy as a local businessman, involved in community activities and government.

The Daily Bulletin says that the Grove is “becoming one of the premiere theaters in the area”. The public is invited to join the Grove by becoming a patron or a season ticket holder.

Listed as a filming location for Cafe Tango (2001).

the admission was 50cents for adults 35 cents for kids. Nice neighborhood theater.

At the time Western Amusement was building the Grove they already owned an existing theater called the Upland. As of July 6, 1946, according to a Boxoffice item of that date, the company was operating fourteen southland houses. They had just purchased Bard’s Adams and Bard’s Fremont from Mike Bard (this is the first time I’ve ever heard that there even was a Bard’s Fremont.) They had also acquired the San Gabriel Theatre in San Gabriel from O.W. Lewis.

Other Western Amusement houses mentioned by name were the Campus, Hunley, and Vista, all in or near Hollywood. The company also operated two theaters each in Victorville, Orange, and Fillmore, and a single house in Glendora.

Western Amusement was formed in 1944. It had originally been planned by Texas showman R.E. Griffith, who died before the company was organized, but Ted Jones, who had been associated with Griffith Theatres for many years, continued the project.

By the time the Grove opened, Western Amusement had expanded to 22 theaters, according to the February 22, 1947, Boxoffice item about the Grove’s opening. There is a small photo of the opening night of the Grove, at which Roddy McDowall acted as master of ceremonies.

The L.A. Library’s California Index has cards making reference to two theater names in Upland. They were the Lyric, in 1914, and the Colonial, in 1930. I haven’t found either mentioned in Boxoffice. Given the time spread, either or both might have been earlier names for the Upland Theatre, which I’ve found mentioned in Boxoffice no earlier than 1939.

Plain the auditorium may have been, but a notable feature was the soundproof booth at the back, where patrons could take their crying children. It had a glass window and the sound was piped in. Gave the place a period feeling. I recall watching Zabriskie Point (awful) and Monty Python and the Holy Grail (much better) at the Grove.

Linkrot repair: The February 22, 1947, Boxoffice item (with photo) about the Grove Theatre in Upland is now at this link.