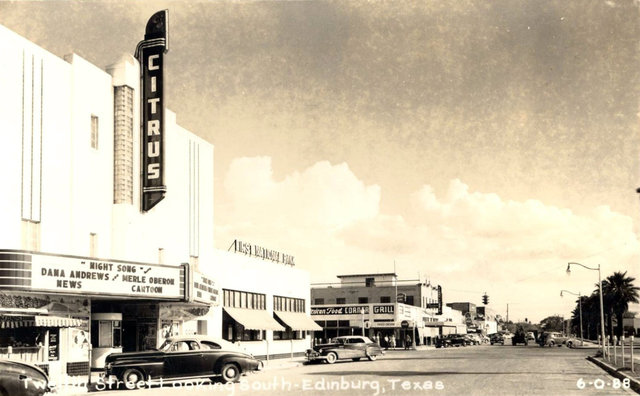 My photograph of the CITRUS View link

An October 7, 1968, Boxoffice Magazine item about the remodeling of the Citrus Theatre shows that the house was in operation at least as early as 1940. The exact wording is “The ticket booth torn down in the current updating was built in 1940….” So it’s possible that the Citrus was built in 1940, or it might have been an older theater that was remodeled in 1940.

The earliest mention I’ve found of the Citrus Theatre is in a 1946 issue of Boxoffice. There are several mentions of a Valley Theatre in Edinburg in the 1930s, and this might have been the house mentioned in the magazine’s “From the Boxoffice Files; Twenty Years Ago” column in the July 3, 1948, issue, which said “Construction work on the $90,000 theatre and office building to be operated by Ed F. Brady in Edinburg, Tex., will be started July 1.” As I can’t find any post-1930s mentions of the Valley Theatre, it seems likely that it became the Citrus after a 1940 remodeling.

I grew up watching Daniel Boone, The Blob, war movies etc. at The Citrus, and double features at the Meskin movie house: The Aztec.

Once, for some reason, as we came out of the theatre into the nuclear blast of south Texas summer, they had a truck with an electric chair on display. Wow! How cool I thought!

Didn’t exactly connect the dots in knowing they would make some human chicharrones with this device, but it seemed cool at the time. Let’s hook somebody up right now and put roman candles in their body orifices and have a fireworks show!!!

mr92849: do you have any memory of a small drive-in theatre located in the middle of a small orchard that is clearly visible in the 1961 view of the intersection of E. University Dr. (SH 107) and S. Raul Longoria Rd. on Historic Aerials?

Chuck1231, any mention of this small drive-in in “The Book”?

I would like to interview anyone that attended this theatre. I am very interested in its history and am currently working on a research project about it. If anyone is willing to give information, please reply. Thank you.

My husbands family (Benitez) owned this and other theatres throughout the valley as well as the Edinburg, Donna, and Weslaco/Mercedes Drive-Ins back in the 1940s until they were either bought over or closed. I think they were the ones who named this theatre the Citrus. His family has a very interesting history, I just wish I knew more.

I remember watching a couple of movies at the Citrus in the mid to late 80s including Roger Rabbit, Honey I shrunk the kids, the Goonies, and Batman. By then the theater was pretty beat up. I remember vaguely in the theater some missing ceiling tiles and a few that hung precariously from the ceiling. The balcony was always closed. Yes, I remember the movie poster with Groundhog Day. It was in the “Coming Soon” marquee. That day never came.

7/21. Currently for sale. They are building a masive new county building/complex across the streat so hopefully it get get restored and be part of revitalizing the old downtown.

This web page about Spanish language movie houses in Edinburg notes that the Valley Theatre was at 222 Harriman Street (now University Drive), so the Citrus was not built on its site after all.