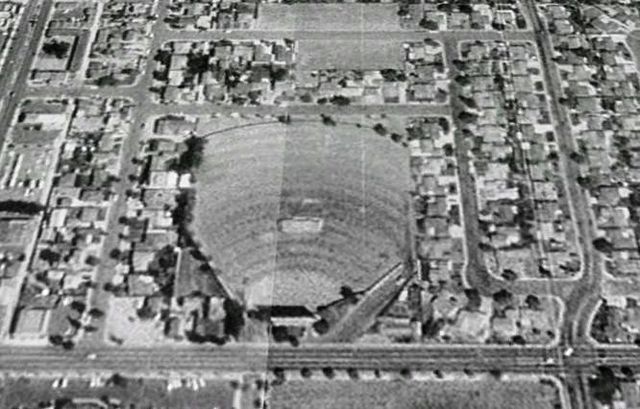 The Park Aire Drive-In was opened October 14, 1949 with Dick Powell in “Pitfall”. It was closed in 1995 and was demolished in summer of 1999. Now it’s condominiums – lots of condominiums.

The car capacity was 500 cars for this Drive-In.

Park Aire opened in 1959, and was up and running until about 1997. During that time, the projector would shut down during the movie, causing horn-honking from disturbed customers. Shortly after that it closed down. By 1998, a few panels had fallen from the screen and weeds began to grow through the lot’s concrete. By June of 1999, an announcement was made in the paper that Park Aire would soon be torn down after 40 years in existence. The Snack shop was torn down as of June 23, 1999. Then on July 21, 1999, the demolishment of the screen began. The entire screen was down as of July 30, 1999. Demolishment continued, and by August, the concrete was being lifted. Soon after, construction began for the new “Via Rubio” neighborhood on the lot. And finally, in 2002, all construction was complete. It was quite a sad, yet nostalgic event when Park Aire came to be no more.

Time will advance and take us farther away from the distant past and people will demolish buildings, break and bury relics but they cannot erase memories. Memories and spirits of the past, remain. I was the little boy in the yellow pinto, eating animal crackers and watching The Buddy Holly Story and Kramer vs. Kramer. Viva Santa Maria and Tri-Tip barbecues! Go Saints!

I experienced my first real kiss on a date at the Park Aire in ‘67. I remember seeing The Dirty Dozen there as a teen, but I remember seeing Jerry Lewis in Rock a Bye Baby there with my parents when in elementary school.

I saw the Blob there… we wore pajamas and when we got tired we slept in the back of the car.

The Santa Maria Valley Historical Society Museum has a web page with a timeline of notable local dates. Fortunately for us, it includes the following line:

The Park Aire is listed in the 1949-50 Theatre Catalog but not in the preceding 1948-49 edition, so that opening date looks good.

This opened on June 14th, 1949. Grand opening ad in the photo section. 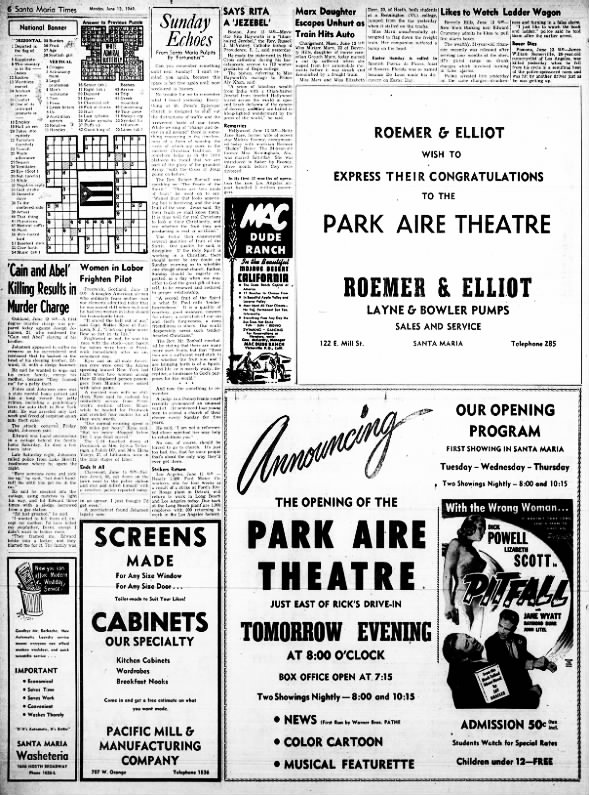 Boxoffice, Jan. 2, 1954: “SANTA MARIA, CALIF. – Seeking recovery of $6,000 allegedly due in back rent and demanding possession of the premises, Charles Pasquini has filed suit here against James Toler and Victor S. Goss, operators of the Park-Aire Theatre. Pasquini, owner, contends that Toler and Goss are in arrears in their rent and charges they have refused to surrender possession of the drive-in.”