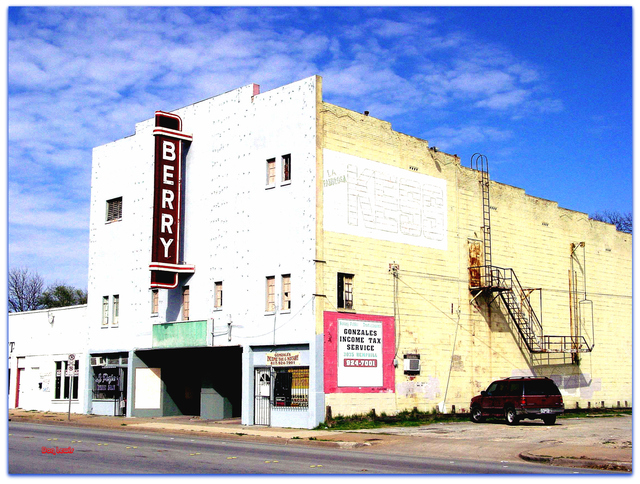 This old relic is just off the corner of Hemphill Street and W. Berry Street on the south side of Fort Worth. The White Theatre was opened on April 3, 1940. It was renamed Berry Theatre in 1961 and began screening Spanish language movies in 1962 when it was renamed Teatro Berry. Judging by its size, it would have seated several hundred people, probably has a balcony and a single screen. It has a huge vertical sign spelling out BERRY. If some of these old theatres could only talk.

My husband, Robert Henley, was a member of the Projectionist’s Union in Ft. Worth, and worked at the Berry Theater in 1972. At that time he was showing Spanish pictures on Friday, Saturday, and Sunday nights, and I was sitting in the little free standing ticket booth selling tickets, while he also kept our 18 month old son with him upstairs, until I closed the box office. We worked for Basil Huckabee, who also had rented the Marine Theater from a man from Dallas. Some Saturdays after the Matinee, the theater would be rented out for a stage show, with well known Spanish stars such as Tony Aguilar, who would sing to the crowd. Robert worked in nearly every movie theater and drive in in Ft. Worth, and also in Waco. Those were the good old days.

This is from a couple of years ago. A hair salon is on the left and a notary public is on the right.
http://tinyurl.com/ycc6sa9

Does anyone know who owns the building now?

As of late last year. Drove by it last night and it still looks the exact same.

A Couple of photos I took back in 2006-07.. *This was originally called The White Theatre….

In the last few weeks, a nonprofit group has torn down the buildings that were attached to the theater on the north side of the building. I have since found out in speaking to someone who new more about the purchased lots that they also wanted to purchase the lots that included the Berry Theater. I found out that if they had been able to purchase the lots, their intentions were to TEAR DOWN THE BERRY THEATER. I know it’s vacant and looks awful, but I wish someone with enough money and vision would come in and restore the theater. They could make it their home, have a theater, and maybe a small art gallery in the front. I’m hoping for the best. It’s really cool to read the old stories here. Keep them coming!

Does anyone knows if this theater is for sale?

Listings started showing up in 1941 as White and renamed Berry in 1961.

M.S. White was the original owner and named the theatre after himself launching on April 3, 1940. White had created the White Theatre and ran the Dal-Sec Theatre in Dallas beginning in 1934 before selling both to Interstate Theatre Corporation in 1936. The veteran film salesman’s career dated to the early 1910s and the Ft. Worth White Theatre was his return to exhibition in a new-build location which once housed an apartment complex. White retired from the exhibition business in 1951 selling off his two theaters.

On May 25, 1961, the theatre became the Berry Theatre and initially kept a policy of second-run Hollywood films and selected short subjects. The Berry would simultaneously be known as Teatro Berry in 1962 when it changed to a policy of showing Hispanic films. The Berry appears to have gone out of business in the home video era on February 21, 1988.