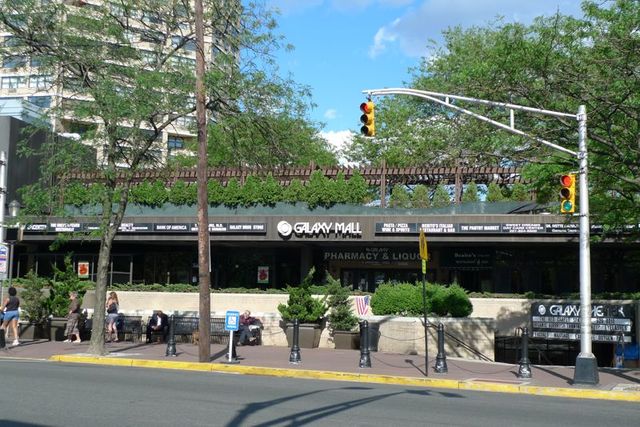 A modern cinema treasure built in 1977, the Galaxy Theatre has been in and out of operation for the last quarter century.

Closed only one year after it opened, the Galaxy Theatre remained dark for a decade, until it reopened in 1987. But, again, the cinema failed to find a devoted audience. When the theater became a discount house, it finally caught on with the public.

Triplexed in 1989, the Galaxy Triplex has since developed a reputation for eclectic programming at affordable prices. In addition to first-run features, The Galaxy Triplex hosted the only regularly scheduled silent film series east of the Mississippi.

The Galaxy Triplex closed in January 2007 and was converted into office space.

Do you post your current programs online anywhere.If you do, please send me the URL.

I must beg to differ with Ross as to this theatre being the only one “east of the Mississippi” to have a regular SILENT film series. Starting in 2002, the ORIENTAL in Milwaukee began a monthly series of films under the title: “Silents Please” as sponsored by the local Kimball Theatre Organ Society, on the ORIENTAL’S three manual, 39-rank (voice) organ of 1930.

It is also interesting to note that this is one of only three remaining theatres having organs in their lobbies, the others being the FOX theatres in Detroit and St. Louis.

I do not pretend to know of the status as of this day of the lobby organ in the FOX in St. Louis since I do not live there, but it is stated on page 13 of the ANNUAL of the Theatre Historical Soc. of 1985, as written by theatres expert David Naylor and the Fox Theatre Associates: “Somewhere behind those [lobby] arches is a special organ —one of three in the theatre— to fill the lobby with hidden music.” (this a quote by them from a local newspaper in Jan. 1929). As of yesterday, national pipe organs expert, Tom Delay, wrote in the “Theatre Organs” portion of the FORUMS of the site www.CinemaTour.com that the St. Louis lobby organ was one of only three lobby instruments remaining in this nation. More can be learned about this on the St. Louis FOX’S page here at Cinema Treasures. I am glad to hear, however, that the auditorium organ still rises and plays; may they both long continue, though I don’t know what “third” organ was as referred to in the above. Perhaps Mr. VanBibber can enlighten us.

This cinema is part of the Nelson Page cinema chain that operates in NJ and NY. Page is a real showman and has organ music prior to the shows. He books new features and occasional classics.

One of the theaters in the Galaxy triplex has a large silver screen with curtains and 600 seats. It’s a nice house that gives impressive presentations. The silver screen was installed to premiere my 3-D feature, “Run for Cover” in 1995.

The theater also appears in the climax of my 2001 film, “Unsavory Characters”. As an inside joke, the cinema is playing my previous
film, “Run for Cover” and the patrons are wearing the 3-D glasses during the shoot out.

Jeffrey Barker is the organist who performs before the shows. He also plays at Nelson Page’s restored movie palace, The Lafayette which is the best cinema in New York State.

Extracted from this article:

At first glance, the Galaxy Movie Theatre in Guttenberg could pass for a multiplex. It has three screens and it’s located in a towering mall and condominium complex.

But no multiplex would show a Disney release, a foreign film and a silent movie all on the same night. And no multiplex has a 1927 Kimball pipe organ in one theater and a Moller organ in the lobby. But what really makes it different from a multiplex is that tickets are only $4 to any show.

Once you step inside the Galaxy’s red-carpeted lobby, decorated with mirrors, chandeliers and old B-movie posters, you feel as if you’re in an old moviehouse that’s been remodeled. But the Galaxy opened 15 years ago – though back then, it only had one screen. In 1990, after it was put under new management, the one screen was subdivided into three. The largest theater at the Galaxy, owned by Nelson Page, has 250 seats. Two smaller ones have 100 seats each.

The Galaxy shows a mix of “intermediate run” movies, meaning films that have opened elsewhere a few weeks earlier, art house pictures and restorations of older films. Each year, it shows silent films once a month, beginning in April and ending with a Halloween screening of “The Phantom of the Opera.”

Music for the silent films is supplied by organist Jeff Barker, who plays the Kimball before the 7 and 9 p.m. shows on the weekend and the Moller on Sundays before the matinees.

Parking, on the seventh floor of the condominium garage, is free.

“At the end of this one, the movie theater dies"
Thursday, January 11, 2007, By CHARLES HACK – JERSEY JOURNAL STAFF WRITER

GUTTENBERG – The organist for the Galaxy Triplex on Kennedy Boulevard will be playing the movie theater’s swan song tonight. Organist Jeff Barker will play the cinema’s vintage Kimball theater pipe organ for the last time.

A tightening real estate market is forcing the theater, which has been selling its tickets for $5, out of business, said Nelson Page, the owner of Galaxy Theatre Corporation.

“It been there for 20 years,” Page said. “It was such a local institution and it is a shame to see it go.”

Galaxy Mall owner Martin Sergi said that the theater is a victim of flagging attendance – a trend in the industry.

“Unfortunately, the neighborhood theater is more behind us than ahead of us,” Sergi said. “We supported it for as long as possible, but we couldn’t do it any longer.” The 17,000-square-foot theater will be converted to offices, he said.

Page said the theater had been doing a steady business over the last five years – with up to 80,000 people attending each year – but its lease was up and he could not pay what the owner wanted.

He said there are no plans to close his other five theaters.

The cinema is in the Galaxy Towers condo complex, where a four-alarm blaze in early December swept through a 10th-floor apartment, killing the 32-year-old daughter of the pilot whose plane was hijacked on 9/11 and was crashed into the Pentagon.

Page said the organ will be moved to another theater, but he hasn’t decided which one.

Sorry to hear of yet another classic theater’s closing. Just watched “Oil and Water” http://imdb.com/title/tt0907656/ which had a scene filmed here.