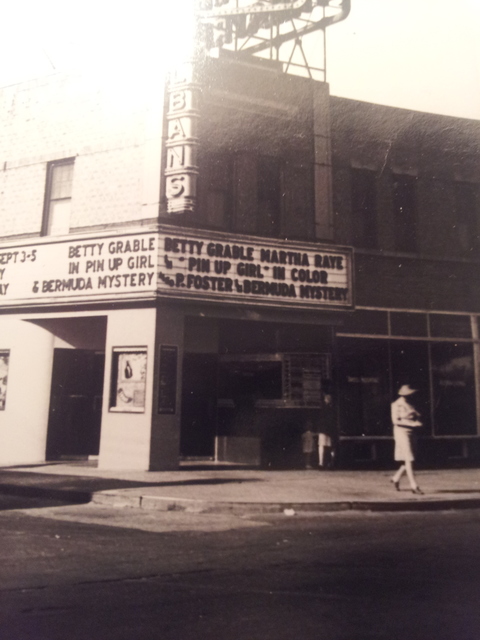 In 1941 the St. Albans Theatre was operated by United L.I. Theatres. It was later taken over by Interboro Cirucuit Inc. This theatre, which now operates as a church, has been listed as existing at 190-01 Central Avenue in Film Daily Year Books. I came upon it because the pastor of the now former Linden Theatre nearby directed me to it. I thought I wouldn’t find it but low and behold on the corner of 19-01 Linden Boulevard, the St. Albans Theatre still survives.

The building hasn’t been a theatre in over 55 years, yet the vertical sign is still on the building! The vertical, however small, covers the second story of the building. Church services in progress prevented me from viewing the interior. The marquee and box-office were removed some time ago.

The building sat 870 people according to records. This was one of many that passed on due to television.

Drove by today, but didn’t have my camera. Anyway, the address should be corrected to 190-01. There is a big two sided sign on the roof (angled in a V-shape to face east and west along Linden Blvd) that looks like it may date back to the building’s theatrical days. There is no longer a marquee, but you can clearly see the frames for the advertising display windows on both the 190th Street side and the Linden Blvd side. The two displays on the side street are filled in with stucco, while a narrow display window on the front facade contains a schedule for the church services.

I’ll have to get back there soon with my camera and snap a few shots to post.

P.S. Didn’t notice the vertical sign, which may have been removed since this listing was created.

I just checked that article, Warren. The photo is small, but if you look about a block down the street, the corner building on the left with the large sign on the roof is the theater. Doesn’t look like the marquee had much of a projection over the sidewalk in this shot. In fact, I can’t make out a marquee at all! I’m thinking there might have been a flat marquee with no canopy? One might have hoped for a better photo to accompany the short article. Anyway, try this link which should bring you directly to the specific page:

That sign is still atop the roof. It forms so that each side is angled towards Linden but still readable from further down the road in either direction. The entrance to the theater is at the edge of the Linden Blvd facade right on the corner of the building, with display cases facing Linden as well as 190th Street. I’ll try to get down there soon for some current photos (I said that back in December, didn’t I?!)

Great work, Warren! Thanks a lot. I will get down there for some current shots (and a comparable angle to your photo) this week.

As promised, I got over to Linden Blvd yesterday mornign with my camera and took the following shots of the former theater:

I didn’t take a photo looking from the west down Linden to approximate the angle in Warren’s photo – only because the foliage on the trees that now line Linden blocked the rooftop sign and facade from that angle. Perhaps I’ll get back there after the leaves fall in Autumn. I did note that the Linden Blvd facades, including that lot and smaller structure with the “tire sale” in the 1954 shot, are more or less as they were when the older shot was taken.

Looks like the theater might have had a true corner entrance, Warren, perhaps with an open passage on either side of that corner column into the outer vetstibule from both Linden or 190th. The one slender display case remains on that corner column facing Linden as seen in the sixth photo down, but you can clearly see where other advertising space was filled in with stucco. You can also clearly see that the building is not in great shape with signs of various patch jobs pretty evident. I’m not sure, but I think the auditorium probably runs parallel to Linden behind the store fronts with the 190th Street facade representing the back wall of the lobby/foyer. That would mean that the ivy-covered structure seen down the alley in the “Rear view on 190th Street” shot would be the auditorium’s left side wall.

Here are some aerial views from the local.live website:

Not sure I’d call it conclusive, but I’d say the auditorium runs parallel to Linden. By the way, that pair of semi-attached houses shown under construction behind the theater in the aerial views are now complete and occupied.

I grew up in St. Albans and remember the St. Albans theatre. It was a shiney (like glass) dark blue facade. My sisters saw movies there and later went to concerts there.

Does anyone remember the Velencia on Jamaica Avenue or the RKO theatre on the avenue.

Both theaters are on this site, Dora…

…and fondly remembered by those who attended.

Thanks for the information. Do you remember the goldfish pond in the lobby of the Valencia?

Also my sis told me she heard “Gary US Bonds” sing at the St. Albans theater in the 1960’s. Unfortunately, I don’t know this artist, do you remember him?

Late response here, Dora… While I do not actually remember Gary US Bonds from his heyday in the early 1960’s (I was born in 1965), I do know of him and recall his comeback in the 1980’s where he enjoyed a pair of well received and fairly popular rock radio hits – thanks in large part to the support of Bruce Springsteen.