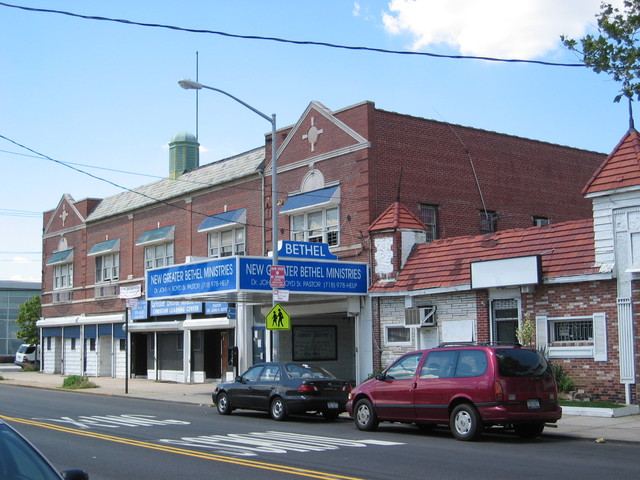 A small neighborhood theater located in Cambria Heights, near St. Albans, Queens. Operated by United L.I. Theatres by 1941. It was later part of the Interboro Circuit Inc. chain. It was converted into a church on Easter Sunday 1975.

This building is in much better shape than the former St. Albans Theater just a couple of miles to the west on Linden Blvd (also presently a church). Comparing these shots to the ones posted by Lost Memory on June 5th, looks like they completely overhauled the marquee, which was nearly collapsing onto the sidewalk. Some of those police barricades are still on site, leaning up against the theater’s side wall on 219th Street. I peaked through the front doors and could see that the ticket lobby is being used for storage of construction materials. The room appears more or less intact, with big display cases on either side wall and a noticeable slope up to the inner doors that lead to the foyer.

Looks like the foyer runs straight back along the building’s eastern wall with the auditorium running to the left, parallel to Linden Blvd behind the store fronts that now seem to be put to ancillary use by the church that occupies (and presumably owns) the building. The rear screen wall runs against the western lot line on 219th Street and there appears to be some exit doors on either side. I’m not sure if the photo marked “Exit Doors?” above actually shows us such a set of doors. They look like they could be, but perhaps they always led to the office space above. There are roll top gates located on either side of what would appear to be the screen wall (see the “rear corner screen wall” shot and also just to the left in the “exit doors” shot).

Lost… the photos you linked to have to be at least a year old. You can see at the far left of the first photo I posted that there is a completed structure on the next block where there was just some construction shedding in the older shot.

Once again, aerial shots from local.live.com help to give us some orientation:

In the view to the East you can clearly see where the auditorium walls taper in towards the screen and identify the sets of exit doors I photographed the other morning. It also appears (particularly in that last view to the West) that this image is even older than the one Lost posted on June 5th as the marquee appears to be the original and the lot on the next block where that new building now stands hasn’t even been prepped for construction. I imagine that sometime between this image and the one Lost linked to, the marquee might have been struck by a truck or bus and damaged to the point where it was in danger of collapse.

By the way… I find with local.live that sometimes when you open the link up, you have to zoom in and drag the image around a bit to center on your target property. The link doesn’t always open exactly as the image you created the link for.

The church that operates out of the former Cambria Theater also holds services in the fromer Community Theater in Queens Village.

Here is the church’s website which states that the Cambria came into their posession on Easter Sunday, 1975.

I moved from this neighborhood in 1969. The last double feature I saw here was Planet of the Apes and Fathom(a Racquel Welch movie).

Does anyone know anything about a theater called the Island? I think it was in Hollis. my mom told me she used to go there in the 30’s. It got movies at the end of their runs, so was cheap and called “the itch” by alot of people. I don’t see it listed on this site. Thanks.

Tis' a pity that there are no comments from local residents who remember this theater’s seedy past. Lots of “soft core” in the late 1960s (I have ads) . Not sure when it went “legit” or closed .

How many “local residents” do you think are contributors to Cinema Treasures, or are even aware of the website’s existence?

The current local residents were not in residence when the Cambria was operating. Neighborhood changed.

Let’s see some of those ads