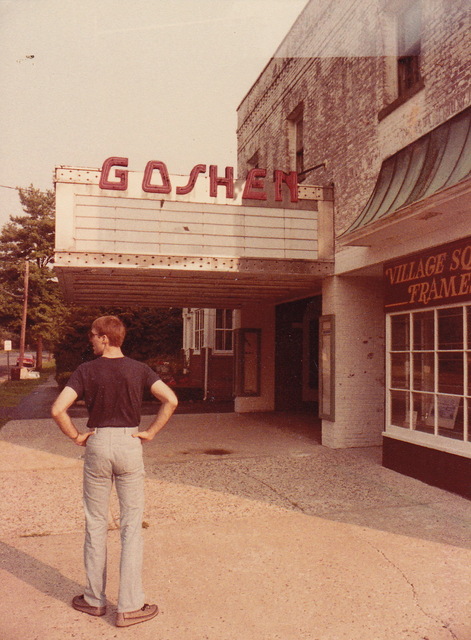 The Goshen Theater was opened March 10, 1939 with “A Man to Remember”. By 1950 it was operated by Liggett-Florin Booking Service. This small neighborhood theatre was just off Main Street.

Saw “Vertigo” after it made the major movie theaters. The Goshen Theater was demolished in the early-1990’s

This theatre was demolished about 10-15 years ago for a parking lot.

The Goshen Theatre was opened on the evening of March 10, 1939, according to that day’s issue of the Middletown Times Herald. The house was designed by architect Thomas W. Lamb with a “…Colonial atmosphere…,” but from the description it sounded more rustic-Early American: the lobby was floored with flagstone, its walls were paneled with knotty pine, and it featured a fireplace with a Dutch screen.

The exterior sounded like it was a more orthodox Colonial Revival, though: “The brick exterior on South Church street, facing the Village Park, was painted white and a cupola surmounted the roof, to be topped later with an iron weather vane depicting a harness horse and sulky.”

An advertisement for the Goshen Theatre in the same edition of the paper boasted that its seats were farther apart than those of Radio City Music Hall. The Goshen was apparently not to be a first-run house, though. The opening feature was A Man to Remember, which had been released in October, 1938.